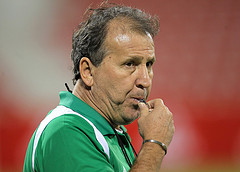 The World Cup referees are in Brazil, but how do they train? Getty Images shot some photo’s during 2014’s Confederations Cup which online media are able to embed on their news and editorial pages. On the 6th of June their will be an open training session, but if you’re not in Brazil these photo’s will give you an idea how the referees train.

Check out the photo series of how referees will train during the World Cup. Zico welcomed the referees on his training ground. And as you can see: the referees make a lot of fun. Hopefully it will be fun during 2014’s World Cup as well.

PS: You can still take part of Dutch Referee Blog’s competition and guess the World Cup refs. Fill in this form.

Zico talks to the referees at the CFZ referee World Cup training ground.

Howard Webb making fun at the first training of the World Cup referees.

Referees are getting their instructions for the training session.

Referees playing a game. Eriksson from Sweden in very enthusiastic about it. In the background Björn Kuipers.

Rizzoli on the photo with Zico.

Felix Brych and Papa Gassama during the training

Photo of Zico is by Doha Stadium Plus Qatar and published under Creative Commons.

12 thoughts on “World Cup referees: how do they train?”