Wolfgang Stark quits refereeing because he has reached the age limit. The man who has officiated the most Bundesliga games ever, will officiate his last game on the highest German football level on May 20th 2017. He is appointed for the game between Borussia Mönchengladbach and SV Darmstadt 98. That’s the 344’t Bundesliga game of the German ref, who surpassed the old record from 338 by Markus Merk this season.

Stark has also officiated at the 2008 Olympics, the 2010 World Cup in South-Africa and the 2012 European Championship. The German ref also was appointed for the Europa League final in 2011-2012 between Atlético Madrid and Athletic Bilbao. He is interviewed in the recent issue of Schiedsrichter Zeitung, the DFB’s referee magazine. From that interview I distilled a few lessons that are useful for all of us referees. I hope you’ll learn something from them. 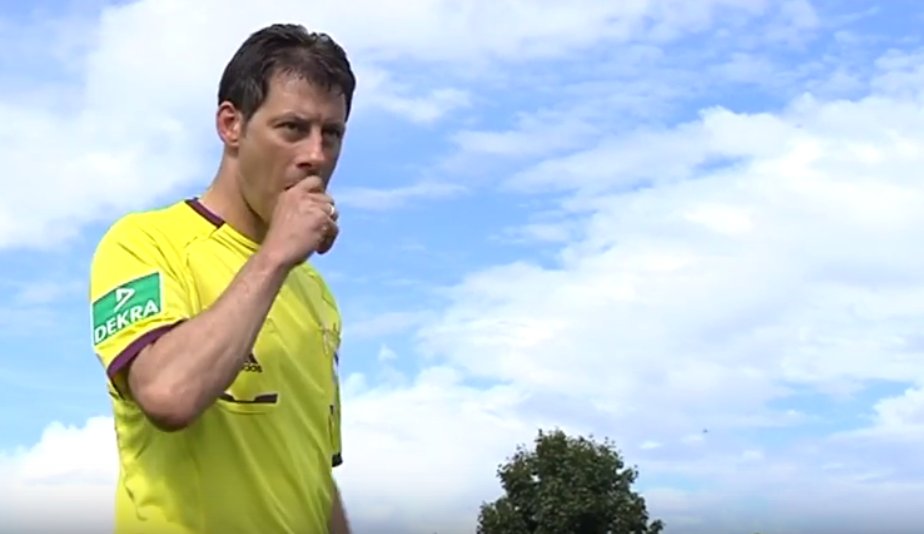 “Alles kein Problem”, is what Wolfgang Stark answered when he was asked about his nervousness before the 2010 World Cup in South-Africa. There was no problem at all, nothing to be worried about.  Stark seems quite relaxed. Even the day before he flew to South-Africa he went to the bank he works at (and still does).

His Bundesliga debut was  on April 4th 1997 with the game between 1. FC Köln and MSV Duisburg (2:5).  He knew that even back then he had achieved more than many referees ever will do. “That’s what I always made myself aware off”. He tries to stay humble and tries to remind himself that what he has achieved is already awesome. So no worries about what will happen in the future, keep positive.

That worked out well. Only two years later he became a FIFA referee.

Stick to your own refereeing style

“Every referee has its own style, which should not changes in big games or final tournmanets”, says Stark. He knows that what brought you so far in your career shouldn’t change because it’s a big game. It’s something that suits you, something you feel comfortable with.

There’s no reason to change it.

Bibiana Steinhaus, who will start in the Bundesliga as one of the newcomers, agrees. She says there are no big differences between male and female referees. All use the same Laws of the Game, have the same prerequisites, but “every referee has a different style of managing a game“.

Steinhaus will use a lot of communication, Stark says his focus is on letting things go. Not much whistles, let players play their game. However, he says you have to remain in control. “As a referee, you always have to know when to intervene.”

You need criticism to grow

“Refereeing finals is the icing on the cake”, says Stark. “Those are the games you’ll always remember, especially if you perform well. So you, as referee, want to be the subject of people’s talks afterwards.”

Unfortunately, games always end that way. Not even for referees with World Cup experience.

There are not many big errors made by Stark, but he also has some negative experiences in the game. “Admitting your mistakes is also part of our job”, he says looking back now. He once showed Marcel Schmelzer a red card for a handball, but the ball has touched the knee. “Nobody is immune for making mistakes, so when you make them, make use of it for yourself.”

Immediately after the game between Borussia Dortmund and VfL Wolfsburg Stark talked to the media about his error to send Schmelzer off. He gained a lot of sympathy by his honesty. And the card also got rescinded.

Stark says that you need negative experiences, because you can learn a lot from them. “Probably these games are at least as important as games that have only positive aspects.”

Pay attention to where you came from

The Stark family got some referee genes. Stark started when he was aged14 years with support from his dad, who was a Bundesliga assistant referee ini the team of Aron Schmidhuber. “I had the advantage that my father himself was a referee. Even if he sometimes criticized me, he was also the one who praised me for my performances.”

And that’s what every referee needs, says Stark.

He stresses that recognition is very import for every referee. As a Bundesliga he is probably praised more often than referees on grassroots level. That’s why Stark joined the a special campaign to say thanks to referees at lower levels in German football. He wanted to honour the referees who are now refereeing at the levels where he once started is career. He did not forget where he came from, and wants to pay these referees some attention.

Before the Bundesliga game between Hannover 96 and 1899 Hoffenheim he honoured 63 local referees. He even put all the names of these referees on the back of his shirt and put it on while officiating his Bundesliga game that weekend. 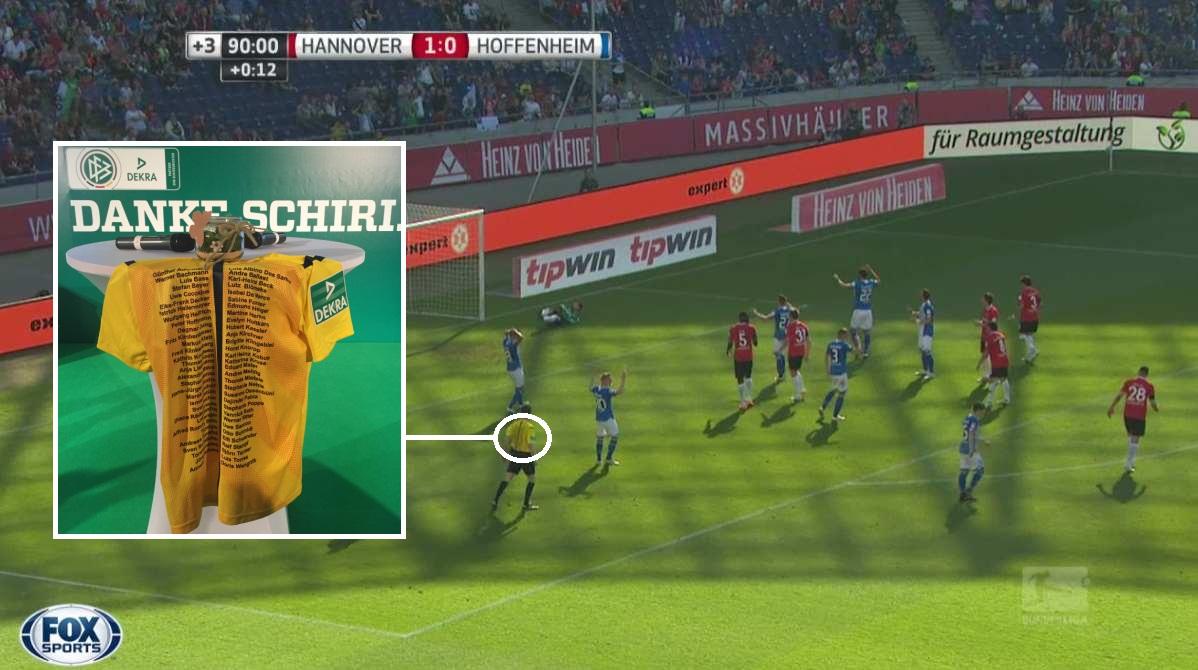 Tv screenshot from Bundesliga game with press photo released for the campain Danke, Schiri (thanks, referees)

“Ever referee needs praise”, says Stark. “Referees should’t get just negative, but also positive reflection. The performances from referees at grassroots level needs are appreciated is very important. All Bundesliga referees started there and that’s what we should never forget. As referees, we all belong to one big family.”

Interview with a new Bundesliga ref

In the 2016-2017 season Bibiana Steinhaus will be one of the new Bundesliga referees. She, and three others, will replace Wolfgang Stark and his colleagues. That is big news, because she will be the first female center referee in the German Bundesliga (and other big European leagues). Want to get to know her? Read the interview with Bibiana Steinhaus.