I visit the online referee appointment system a few times a day. Refresh it, or log in again. And again. Winter break has lasted long enough. I want my first match appointment of 2013. 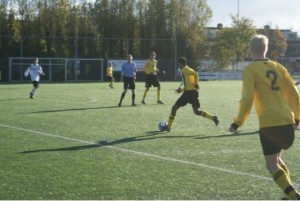 VFC A1 – DONK A1 with the author of this blog as referee. Photo by away team.

Especially because I’m coming back from an injury. My last match as a referee was between a u19 match between VFC Vlaardingen and DONK in October. A very very nice appointment between the number one and two of the league. It resulted in a wonderful match which ended in 1-2.

Just a few days later I broke my ankle during a futsal match. I recovered and did a full training session at the Hague’s referee association. But then snow fell two weeks ago in The Netherlands. No more training sessions outside and all amateur matches are called off for two weekends in a row now.

I’ll be officiating a futsal match next Monday. Nice, but I want to be back on the outdoor pitch. Some refereeing friends already got their appointments for the end of February. After writing this post, there might be a match …

Still a white screen, but I’ll keep refreshing. Really looking forward to the second part of the season.

Did you already get your first appointment of 2013?

3 thoughts on “Winter break: waiting for my first 2013 match”