The relevancy of ball direction at offside situations. I never thought it was a big issue, but I was wrong. In matchdays, I post screenshots on my social channels like Instagram, Facebook and Twitter. As Watford scores the 3-3 equaliser against Liverpool, I share a screenshot from television. The idea: can you see if the attacker in offside position is closer to the backline then the ball or the secondlast defender. But I got a lot of comments on the fact it is a backpass. In this offside case study I explain why the the ball direction is irrelevant.

Please answer for yourself if the player is in offside position. A little exercise now: summarize the offside criteria for yourself. Write them down before you scroll down to the video and explanation. 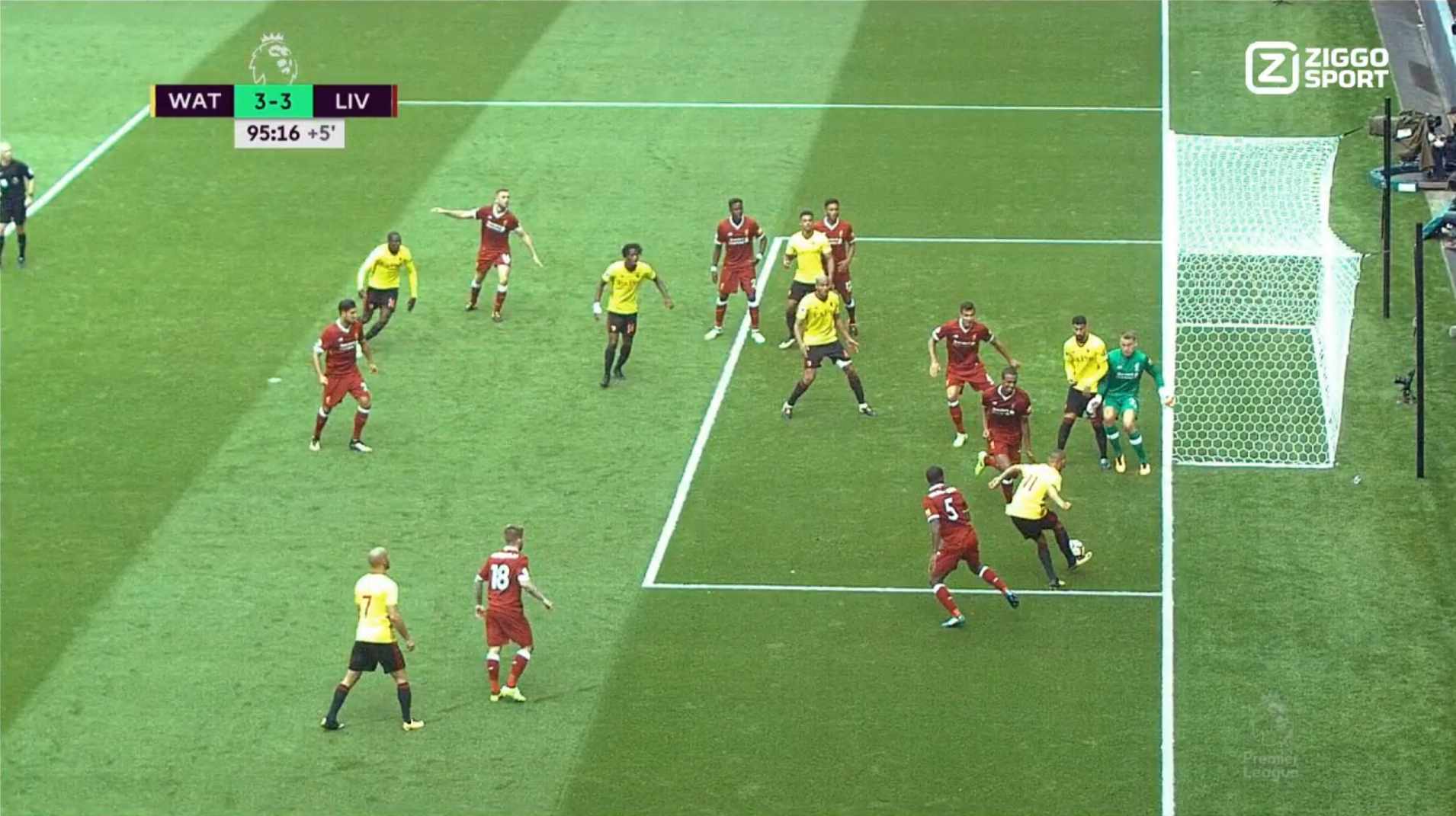 Yes, it’s very difficult to spot, because it is so close. And in the real game it happens at high speed, which makes it almost impossible for the AR to call. To begin with it’s good to know that “it is not an offence to be in an offside position”.

The criteria to be in offside position are:

The second-last opponent is too far away to make him onside. Then the position of the ball is relevant, which means not the toes of the player who passes the ball. It’s a very close call. My idea is that he is in offside position, but love to see a 3D model of the situation. Let’s assume he is offside, but is it an offence?

The ball direction is backwards

Let’s get into detail what actually happens after the moment of the shot/pass by Watford 11. The ball goes backwards, touches a Liverpool player, Liverpool goalie Mignolet and the bar. Then Watford attacker Britos, who was probably in offside position, scores. An analysis below the video.

The first thing: the ball goes backwards. Lots of referees replied on the social channels that it therefore can’t be offside. That surprises me, because it’s a wrong assumption. Not the ball direction is relevant, but the position of the players.

Because the Liverpool player is so close to the situation, he can’t respond properly. This not a save or deliberate play, but a deflection.

Interfering with an opponent

As the goalie touches the ball, the attacker has not played the ball yet. But the question is if he’s interfering with an opponent.

The Laws of the game say that players are interfering with an opponent by:

In this situation the attacker interferes with play and he impacts the ability of the goalkeeper to play the ball.

In this situation the goal should have been disallowed if the attacker is in offside position, because he interferes with the goalkeeper. Please keep in mind the player might be centimeters offside, so it’s something which is very difficult to spot during the game at full speed.

But most of all, I wrote this case study to explain that ball direction is not relevant.

If you see an interesting situation on the pitch, please let me know via jan@dutchreferee.com.

14 thoughts on “Why ball direction is irrelevant (offside case study)”