The wait and see technique is well-known in football. Assistant referees should not raise their flag too soon, but wait how play continues. This blog post contains three great offside examples to show how it works.

What is your first thought when seeing a situation like this below? Offside probably, but nothing is what it seems. 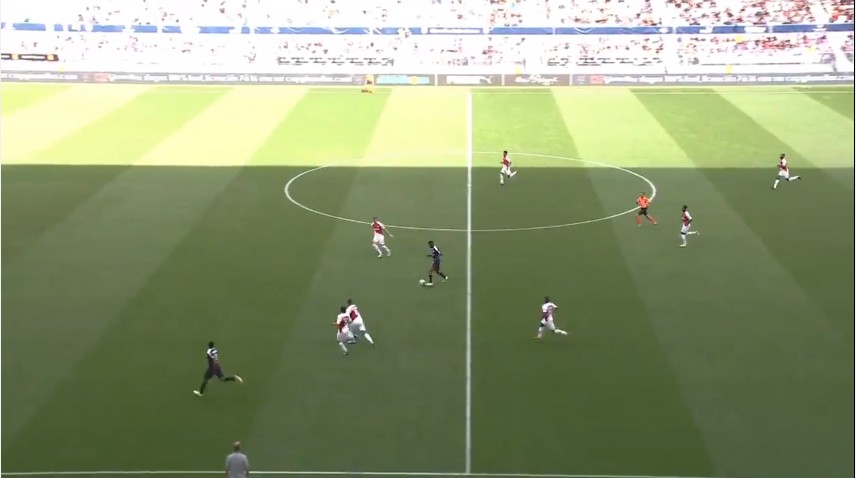 Because when you have a clip of the full situation, you’ll notice that the player does not get involved in play. The player who passes the ball is the person who also touches it again.

Biggest lesson here: have the courage to wait. The next situations are a a bit more tricky. See below.

Wait and see by Marciniak

The second example is from a 2017-2018 Champions League game. Feyenoord plays at home against Manchester City and the referee is Szymon Marciniak. But I’d like to mention his assistant referee Tomasz Listkiewicz. I’ll analyse the situation below the video clip.

How important waiting is

The situation as it happened. Manchester City takes a corner kick and the ball does not get away. A Feyenoord defender blocks a shot from outside the box, but it’s not sufficient. There is a second shot on goal. As you can see, at the moment of the pass there is an attacker in offside position. 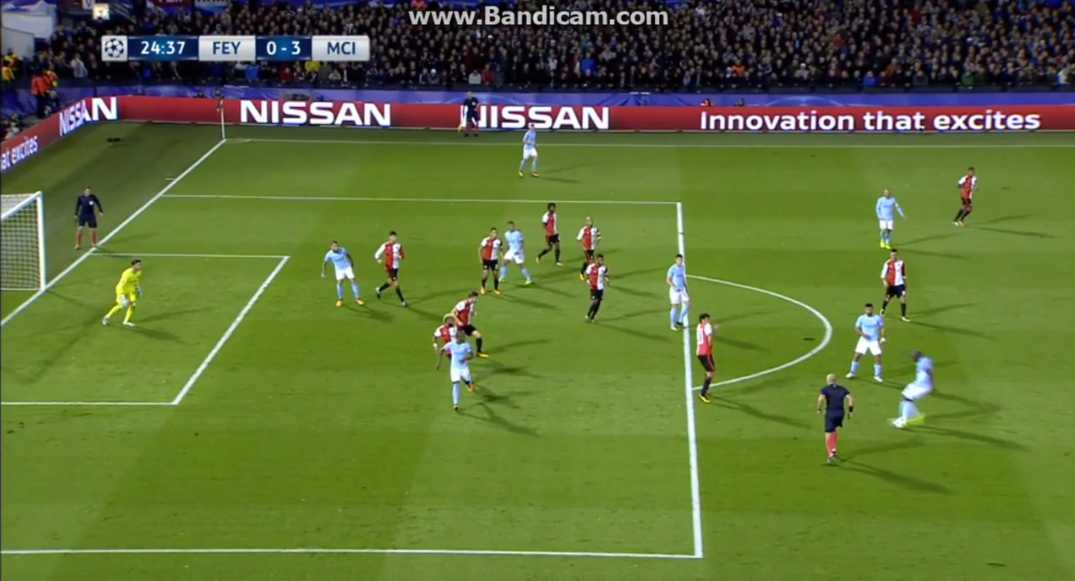 Feyenoord goalie Jones saves this second shot and the striker in offside position is not yet active in play.  The Laws of the Game say the following about this. A player is interfering with an opponent by:

That is what happens here if the player in offside position gains the advantage. But is that the fact here?

Wait and see technique in LOTG

The Laws of the Game (LOTG) also mention the fact assistant referees need to see how play develops. The rulebook says: “The AR must use the “wait and see technique” to allow play to continue and not raise the flag when the team against which an offence has been committed will benefit from the advantage; it is therefore very important for the AR to make eye contact with the referee.”

And that is exactly what happens here. Although the player is in offside position, he is not active in play and does not interfere with an opponent. The assistant referee waits until someone touches the ball and that is an attacker who is not in offside position at the moment of the shot on goal.

Great teamwork by the match officials and good use of the wait and see technique. I’d love to hear how they communicate in situations like this, because that makes it even more interesting. It gives us an even better idea how these calls are made. 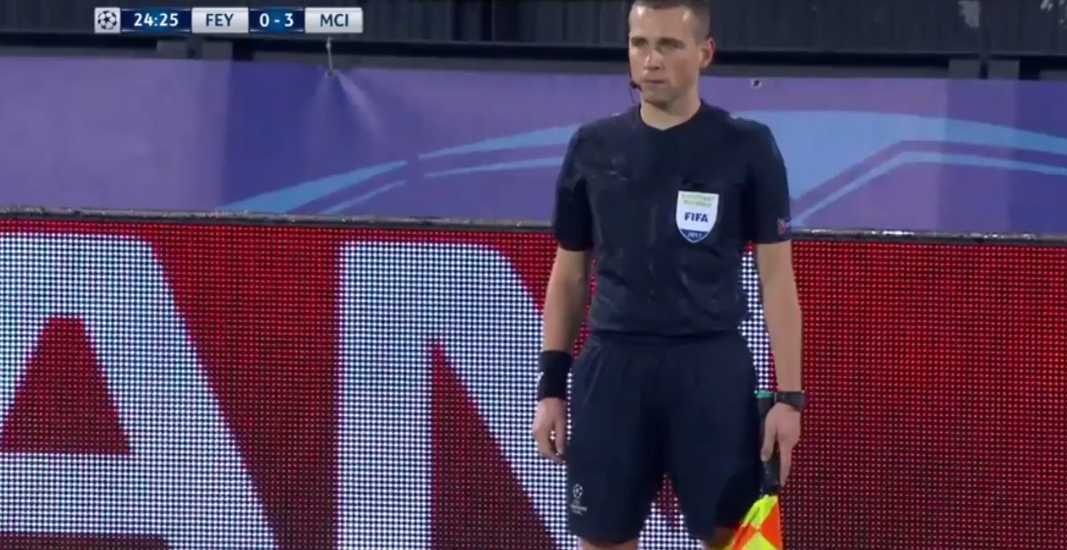 Situation in The Netherlands

The following situation is in The Netherlands, but it’s slightly different. You’ll see that striker Van Wolfswinkel is in offside position at the moment of the pass and he runs towards the ball. What would you decide in this situation? (start at 1m56s) 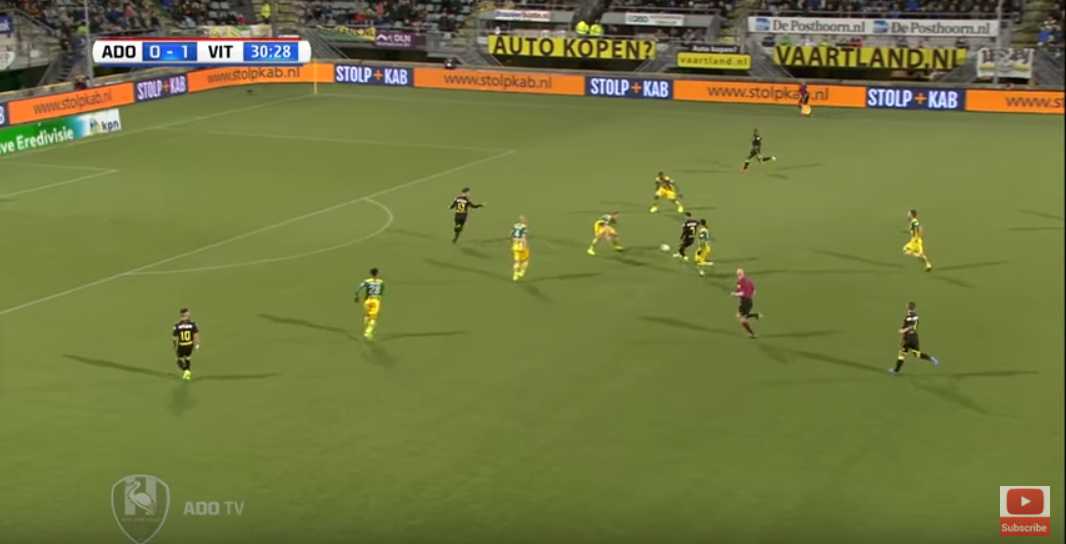 Interfering with play or an opponent

And then something interesting happens. Van Wolfswinkel (red circle in pic below) runs towards the ball, but does not touch it. And that is the crucial detail to make the correct decision, because that’s important to determine if someone is interfering with play or an opponent.

Players interfere with an opponent by:

Van Wolfswinkel is running towards the ball, but that does not meet the criteria above. His actions don’t have an impact on the opponent.

But he is the player who scores. What is in the LOTG about gaining advantage? 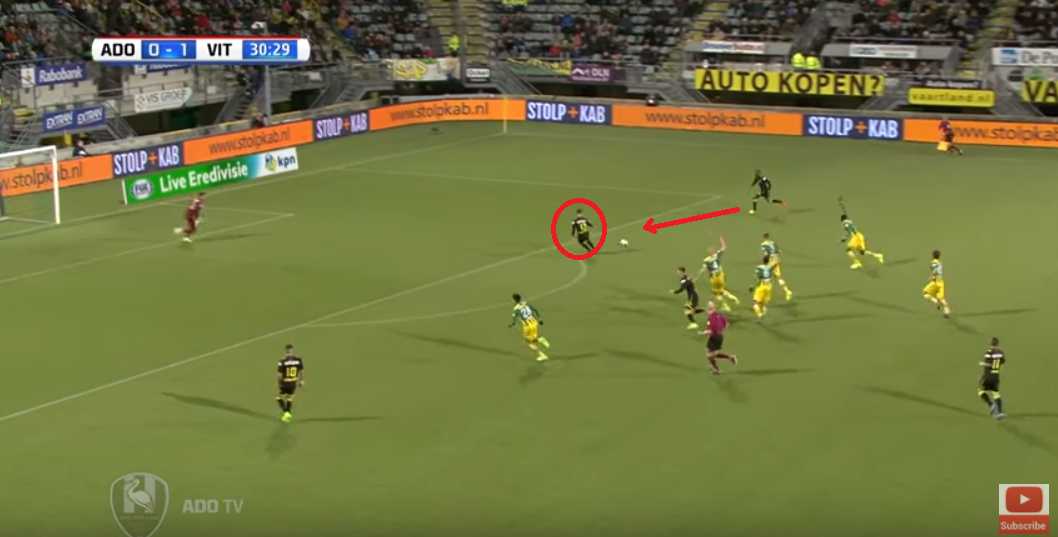 I want to tell you something about gaining an advantage. But we forget one important thing. Is the other player in offside position? In the video you can see lines on the pitch. I’ve marked it purple below and you see the secondlast defender’s shoe is closer the goal-line. 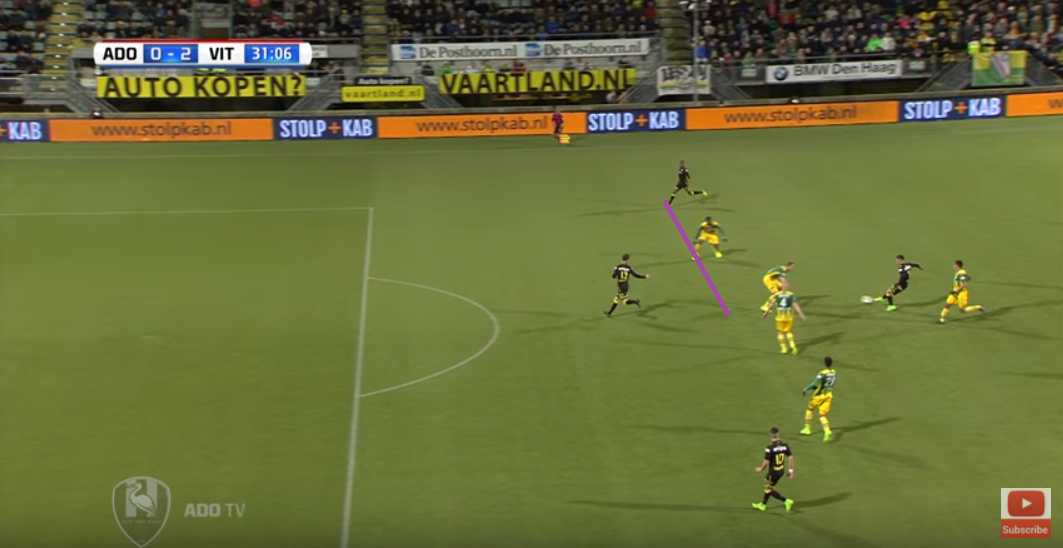 Gaining an advantage only applies when the ball rebounds from an opponent, crosbar,goalpost or match official. Or when a defender deliberately saves the ball. That’s not the case here. As a result, there  is a new situation at the moment the right winger receives the ball. When the right winger passes the ball back to Van Wolfswinkel, he is behind the ball. Correct goal and great wait and see technique there.

Do you remember any interesting situations like this? Let me know.