VAR disallows goal in Champions League. A historical decision, but is it the right one? A case study from a refereeing point of view.

It’s a match situation in the game between Ajax and Real Madrid. The referee is Damir Skomina and the video referee is Szymon Marciniak. In the Uefa documentary Man in the middle Skomina says about VAR that referees have to forget their ego.

Want to receive the latest info about refereeing? Subscribe to the newsletter.

Check out the highlights of the situation. Below you’ll find the explanation.

Because it is so difficult in real-time, you need a VAR to check this moment.

De Ligt heads the ball towards the Real Madrid goal. At that moment Dusan Tadic and Nicolás Tagliafico are not in offside position yet, which means that they will not be punished for gaining advantage.

Goalkeeper Thibaut Courtois is catching the ball, but is unable to clear it. Nicolás Tagliafico goes to the ball and heads now towards the goal. The moment of that header is key here, because that’s what gives us the right decision.

Dusan Tadic is in offside position at the moment of the header.

Insight into referee and VAR communication

It’s a pleasure to watch the Uefa documentary Man in the middle. In that series you get an insight into the the communication between VAR Marciniak and referee Skomina. That helps us with the understanding of match situations.

Here is their communication:

Then we see Skomina entering the referee review area. VAR says: “Look, when the goal is scored, the Ajax player is touching the goalkeeper. He’s in an offside position”.

Skomina says it’s okay and then disallows the goal after watching the clip. He says he is happy with this help so he’ll not be the person on the front of the newspaper, because one team is out of the tournament. “VAR is really welcome to help us.”

How can someone be in active play?

How can someone be in active play when in offside position?

Option 1: by interfering with play by playing or touching a ball passed or touched by a team-mate.

In this case Dusan Tadic does not touch the ball.

Option 2:  interfering with an opponent.

But how can someone interfere with an opponent? By:

There is contact between Dusan Tadic and goalkeeper Thibaut Courtois, but is that enough? For me this action has an impact on the goalkeeper’s movements, which makes him unable to play the ball or go to the ball. For me he’s interfering with an opponent, which means the offside call is correct.

Want to receive the latest info about refereeing? Subscribe to the newsletter. 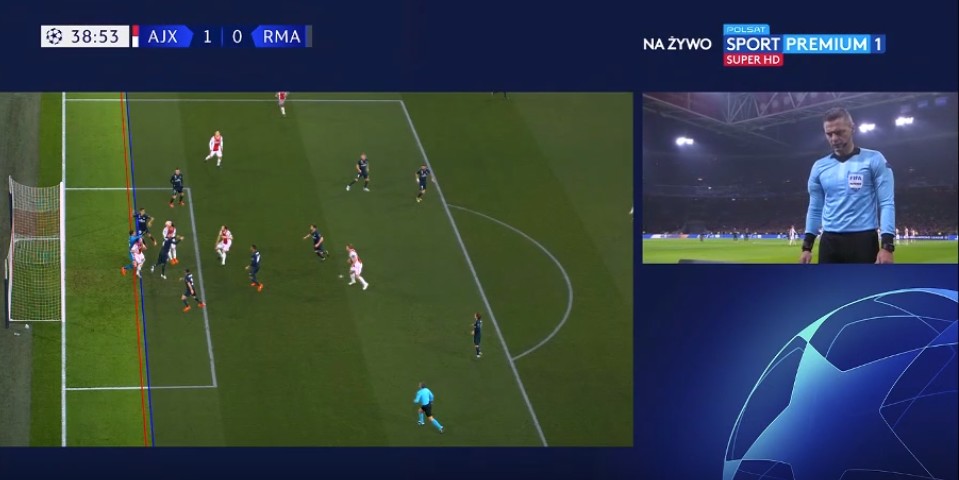