The Uefa u17 Championship referees show some good things during their tournament. In the highlights you’ll see lots of things that you can learn from as well. The videos below give you some great insights in how to handle in some situations.

I hope you can learn from them.

NB:Uefa has blocked embedding of the video. Click the play button and then “watch video on YouTube”. You’ll go to the right minute straight away

Adapting to play when cross comes in

In the game betwee Spain – Austria the referee is Manfredas Lukjančukas (LTU). Because he sees the cross coming in, he moves backward.

The advantages: you’ll keep an overview of the situation and you make sure you’re not in the way of the players.

Farrugia Cann Trustin officiates the game between Hungary and Portugal in Dublin. The Maltese referee is assisted by Fatlum Berisha (KOS) and Riku Vihreävuori (FIN).

He shows how important it is to make a sprint when there is a counter-attack. The advantage: you’re able to make the right call, but also sell it better to the player because of proximity.

Check out this case study for referees about counter-attacks

Adapt your positioning when someone comes in between you and the ball. Because number 14 blocks your view, you need to adapt your position. That means you can better follow play and see the ball and possible infringements.

What do you want to see with free kicks? Think about that before you continue below. 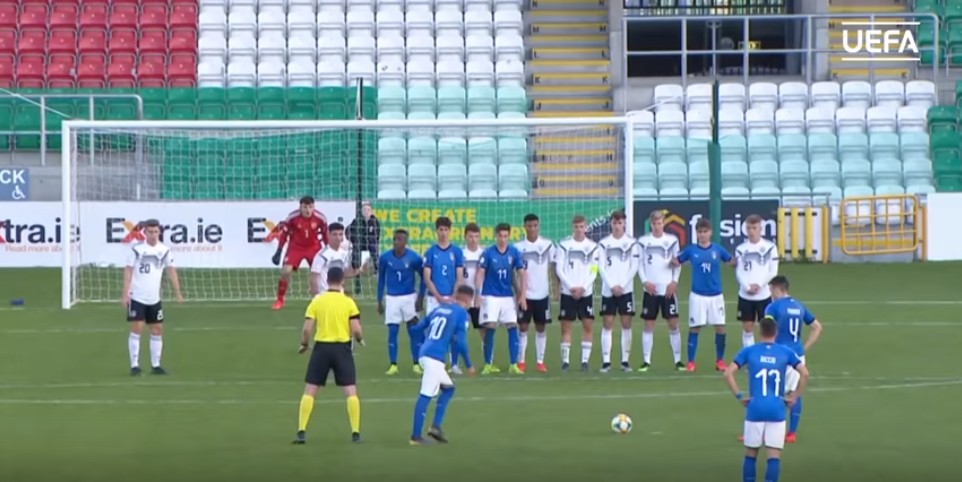 And at another free kick the view from the goal.

To come back to the question above. You want to see:

Just to name a few things. Did you come up with more? Let me know.

The referee in this game between Germany and Italy is Donald Robertson (SCO) by the way. He is assisted by Deniz Sokolov (BUL) and Joaquim Da Silva (LUX).

Signal there is no foul

A lesson I told many referees at Ibercup 2019 is to signal as well when you see there is no foul. That is also a decision you make. Communicate that with the players, coaches and the crowd. A good audible and visible signal communicates a decision very well and they notice that you’ve seen something.

In the u17 game between England and France referee Rade Obrenović (SVN) does it. Arms wide to indicate nothing happened, no handball.

Be alert with the pass from a defender

Assistant referee Deniz Sololov does not flag in the following situation, but many hands from defenders go in the air. Well-spotted that the pass comes from the defender.

Which role does the referee – in this case Jørgen Burchardt (DEN) –  have here? Check out this case study about his responsibility.

The audio on Uefa highlights is not always audible, but here it’s very clear. The referee is calling “hands down, hands down” in the game Spain – Germany. Espen Eskås (NOR), who later on whistles the final, uses a smart technique here to prevent players from making a foul. If you mention it, they’ll be more alert in not doing it.

Don’t stop running after a shot

It’s easy to think: I’ll stop running once the player has shot on goal. But that’s not true. At 0:47 the ball goes on the pole and then you can’t stop running. The ball comes back and you’ll end well in the penalty area, because you went on and did not stop. Gives a good impression, but also gives the opportunity to spot infringements from more closely.

Go deep, don’t stay at edge of the pen area

In the quarter final between Hungary and Spain the referee follows play quite far into the penalty area (0:37 and 0:47). Don’t hesitate to move forward, but always be aware where others are.

In case you’ve see the Dutch referee score a goal, you know what it can lead to. So better come in from the left and make sure you’ll follow from behind and don’t move too close to the goal.

If you start too central, you need to cover a lot of meter before you’re close to play again. Because this ball at 2:17 goes long, you need a very good sprint. It’s difficult to see in highlights how a referee got in a certain position, but I’ll advice you generally to stay a bit more to the left of play, so it’s between you and your assistant referee.

But then: what a good sprint.

Anticipate to where ball will land

As referee you’ll never know what players will do, but many thinks will have some logic in it. With a free kick at 1:02 you see the referee is eager to move forward and be close to play. No reason to check a wall so far from the goal, but be there where the ball will land.

That is where your next (possible) problem will be.

So always ask yourself: where can I expect the next action? And anticipate to that with movement and positioning

The final highlights are also available. Take a notebook and see what your take-aways are from that game. Please let me know in the comments below.