Turkish competition is now two weeks on it’s way. Before the season all referees came together for a seminar with Uefa’s instructors.

I spoke with Ahmet Çağatay Gür, a talented regional assistant referee and sales manager from Ankara about refereeing in Turkey, the country ‘where everybody is a referee’.

A short introduction in photo series.
Or text: “When I was a young, I was a footballer, I played for the best club in Turkey and also my father was a Super League footballer, for clubs such as Gençlerbirliği, Kayseri Spor, Hacettepe, Beşiktaş. I mean that my family comes from the football. But after my education life I have started refereeing.” 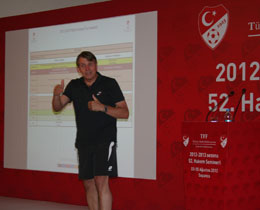 Photo of Uilenberg at Turkish referee seminar. Photo by TFF and via interviewed referee.

“Uilenberg said that he was very satisfied with Turkish refeerees’ performance on EURO 2012.” Main topics for the Turkish refs were interfereing with opponent, positioning at penalty area with free kick, distinction between yellow and red and how to deal with objections after a decision.

Refereeing is not easy in Turkay, stresses the young Turkish assistant referee. “If I talk for Turkey, refereeing is very hard because, as you know, all people are a referee and everyday they talk about football in my country.” In his opinion the mass media mislead people pretty much. “Therefore refereeing is soo much more difficult in Turkey. Sometimes when we conduct amateur league match, we have to be more careful because they are amateur and they have noting to loose, sometimes it even can be dangerous.” 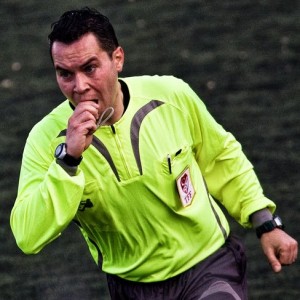 Photo by Doğa Somer and provided by interviewed referee.

But Ahmet Çağatay Gür sees also a positive think because Turkey is a football country. “All people love football, men and women. So Turkish football and refereeing have been rising last few years.” That’s what he wants to do too. “If you ask me why I am referee, I can answer this question that I love football and also my life becomes beautiful with refereeing. My goal is that I would become best assistant referee in Turkey and also I want to be appointed Champions League matches. As a referee, I would like to contribute in my best way to Turkish football.”

2 thoughts on “Turkish referees are ready for new season”