Netherlands has a good chance to beat Germany at tonight’s Euro 2012 clash in group B. At least, if we base our conclusions on referee’s hair stats of previous matches between the two teams.

Dutch graphic design student Bart Corré analysed all previous 38 matches between the two teams for his graduation thesis (pdf). Germany scored 56 points in them, Holland 44. The Netherlands will also not win based on the nationality of the referee: both teams scored totally 7 points each with a Swedish referee. Tonight’s referee is Jonas Eriksson and this important clash in group B is his first match of the tournament.

It’s also not the colour of the referee’s shirt which makes Holland win. Actually, the Germans have won more games (out of 35) with a man in black on the pitch. It’s not the age of Eriksson, who became 38 years old on the 28th of March this year. The average age of referees in matches Holland won is 42.

None of that all. It’s the colour of the referee’s hair which ‘proves’ that Holland is going to win. Eriksson’s brown hair should bring my country some luck. Germany has just won 4 out of 14 matches with a brown-haired referee, compared to six victories for The Netherlands. That’s the best Holland can rely on, or maybe their quality will do … 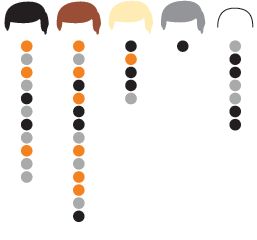