“Refereeing in Greece is sometimes an extreme sport”, says Thalia Mitsi in an interview with this refereeing blog. The Greek referee will use that experiences during the 2014 Algarve Cup. The tournament in Portugal which has just started is important for her on her way to reach the 2015 Women’s World Cup in Canada. 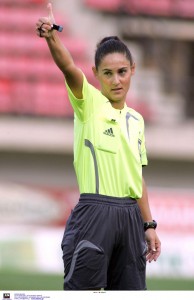 Congratulations with your appointment for the Algarve Cup. In 2013 you officiated the 3rd place match. What do you expect from this year’s tournament?
Thalia Mitsi: “I expect to have good performances, learn a lot, improve as a referee and enjoy football!”

How important are tournaments like the Algarve Cup for referees?
Thalia Mitsi: “Tournaments like the Algarve Cup are not only important testing grounds for players but also for referees. We go through a workshop and some matches and we are tested and evaluated in various elements. This year’s Algarve Cup makes also part of the preparation for the prospective candidate referees and assistant referees for the FIFA U-20 Women’s World Cup Canada 2014 and the FIFA Women’s World Cup in Canada next year.”

Last Women’s World Cup you were a fourth official. You were at the Olympics in London. What are your goals for the next World Cup and how are you trying to reach them?
Thalia Mitsi: “My goal is to be appointed for the next FIFA World Cup. I am working hard on that by training hard both physically and mentally on a regular basis, officiating games and studying different match situations. This requires a lot of effort, discipline, dedication and of course balance between refereeing, work and personal life.”

There’s not much information in English about refereeing in Greece. What level do you referee there? Do you expect to reach men’s highest level (Super League) soon?
Thalia Mitsi: “I have been refereeing in the Greek Men’s Second Division since 2008. I have also been appointed as a fourth official several times in the First Division (Super League). Only God knows whether I will be a main referee soon at this level!”

A Greek referee told me once he was very surprised I never got punched as a referee in The Netherlands. How’s refereeing in Greece?
Thalia Mitsi: “Refereeing in Greece can sometimes be an extreme sport 🙂 There is a lot of aggression in some matches. And unfortunately violence is one of the problems of Greek football… It should not be a war, football is just a game!” 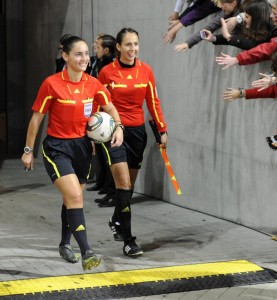 What are your future goals in refereeing?
Thalia Mitsi: “I want to continue developing and have good performances as a referee. 100% correct critical decisions is my goal for every match I referee.”

What advice do you have for ambitious (young) referees?
Thalia Mitsi: “My advice to them would be to work hard and dream! And to have passion, determination, patience, discipline, faith, integrity, poise and confidence.”

4 thoughts on “Thalia Mitsi: Refereeing in Greece is sometimes an extreme sport”