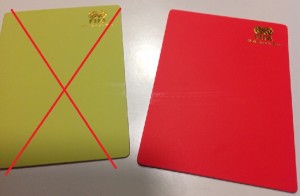 Yellow card relinguished by referee. From then on he only shows red.

Yellow card relinguished by Argentine referee Carlos Maglio. He gave it to the fourth official so everyone could see it. Maglio already booked eight players at that moment in a friendly between Argentine rivals Estudiantes and Gimnasia. The players were not getting the message, so he wanted to make something clear to them.

And indeed, the first card Maglio gave to a player was a red card. “Retiring the yellow was a spur of the moment decision. I had already booked eight players and I didn’t want them to keep on hitting each other,” Maglio told La Red radio.

“The fourth official asked me to give it to him so that everyone should see it,” he added. “That way it was clear to everyone that the yellow was no longer in play.”

Maglio showed only one red card after a serious foul by Israel Damonte.

“Even if I’d had the yellow card he would still have gone off,” said the ref of Damonte. “It was a red (card) offence.”

Watch the referee brings his yellow card to the fourth official (from minute 1:55 minute)

“Referees would have issued a red card for sexually inclined words or phrases rather than for terms insulting one’s appearance.” That’s the conclusion of a study by researchers at the University of Vienna.

The Austrian scientists also found that referees regularly ignore the use of swear words by players on the pitch. Their research shows that only 55.7 percent the participants will give a red card in response to a verbal offence. (Will add table with stats about ‘yellow’, ‘admonition’ or ‘no reaction’ next days. Tell me if you’re interested.)

Referees from Vienna referee organisations were placed in front of the computer and got the question what they’d decided if a player would use a particular swear word. Eleven from the 230 contestants pronounced judgments in accordance with the Laws of the Game. “They chose the red card for all of the pronounced swear words.”

Seven of the participants told that verbal abuse would lead to a red card, but they did not give one in all cases. “This suggests that although referees know how to apply Law 12, they do not consistantly do so”, says the research report.

Final conclusion of the researchers: “Possibly, a game like soccer requires game managers rather than referees.”

Tell me what you’ll do if a player insults you!

PS: Trying to get the list with swear words by the way.