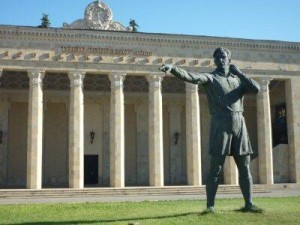 Tofik Bakhramov is the only referee in the world with a statue. He’s one of the 414 statues from 56 different nations in the World Football Statues Database, published on 7th of April 2014.

The website displays databases for all UK sporting statues, US baseball statues and world cricket statues, and world football statues. The bronze statue of Tofik Bakharamov is place in front of the offices at the Tofik Bakhramov Stadium.

But who is Tofik Bakhramov? He’s the linesman who famously judged England’s third goal to have crossed the line in the 1966 World Cup Final agaist West-Germany. Bakhramov (29 January 1925 – 26 March 1993) is commonly known as the Russian linesman in the United Kingdom for that (he was living in the former Sovjet Union, but is born in what now is called Azerbeijan). The referee was selected on the Fifa panel only two years before the famous World Cup final. In 1993, the stadium was named after the famous football referee Tofiq Bahramov who died in the same year.

According the BBC Tofik Bakhramov “is remembered in Azerbaijan as an inspirational figure who brought international attention to Azerbaijani football and refereed some of the most important matches in the former Soviet Union.”

For who’s interested in the famous situation where Tofik Bakhramov judged it was a goal for England in the extra time of the World Cup final, check the video below from 5:46 minutes.

Do you know a referee who has a street named after him? A building or foundation? Please let me know.