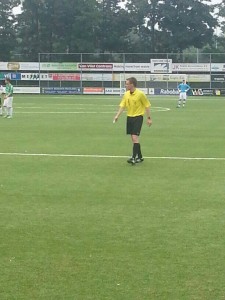 I refereed my first match of the season. An exciting, challenging AND sportive cup match. Game went up and down – lots of running for me – and ended in a 3-2 win for the home team. When I left the pitch a man in a suit approached me. I thought he might be my assessor, but afterwards I learned he was the chairman of the losing team. He said: “On behalf of my club I’d like to thank you for refereeing this match. Well done.”

Later a refereeing friend told me that particular chairman of the away team always thanks the referees afterwards – no matter what the result is. It’s not that they have to give compliments, just a simple thank you. Sometimes referees not even get thanked by the team players or coaches. I like the policy of this chairman. It’s a nice start of the 2013-2014 football season.

How was your season start? And do you have such positive experiences (maybe during earlier seasons)? Please share them.