Romanian football refereeing is in the lift. Teodora Albon and Cristina Dorcioman got appointments for major finals last season.

“I was very happy to have been appointed for the final”, says Dorcioman, who refereed UEFA Women’s EURO 2013 final between Germany and Norway in Solna, Sweden.

Dorcioman talks to Uefa.com about her experiences. Such finals are very important for the development of women’s refereeing in a country. This is a great opportunity for Women’s refereeing in Romania and why not for males too”, she said. “Because many young people ask me how to become a referee. This was a remarkable thing and I’m happy because I can be a positive example for my students at school.”

Female refereeing in The Netherlands

The Dutch refereeing needs some good achievements from top referees. The total number of female referees in the Netherlands was only 49 in the 2012-2013 season. The Dutch FA (KNVB) hasn’t released new stats yet, but local offices of the KNVB ask for more female match officials. In nothern district only 8 out of 1000 referees are female. Local tv made a short documentary at a match of Marije Deuring, who officiates men’s matches for five years now.

In the video (in Dutch) one of the coaches says afterwards: “The first five till ten minutes the players see a woman as referee, but they didn’t notice it after that. She (the referee) earned their respect.”

How’s the development of women’s refereeing in your country? Do you know how many female referees there are (and how many male)? 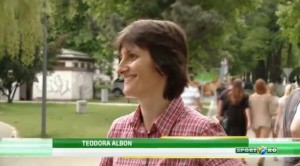