Best wishes for 2012. I wish you a good refereeing year!

“My hope is that we can officiate the final of the tournament. Everything will depend on the performance of us on the field.”

Neant Alioum from Cameroon about his appointment for the African Nations Cup.

“I enjoyed it when a match went well and all persons involved gave me a handshake afterwards to thank me for the match. That’s the biggest appreciation a referee can get.”

“Sometimes the reactions of the players are clever and they help the referee to get the player sent off.” (…) “Everyone does it now. We should maybe be better at it than any other team. We don’t do it and are punished because of it and maybe we should start doing it.”

Stephen Hunt, Wolverhampton Wanderers midfielder, after his teammate Nenad Milijas was send of during the match against Arsenal. Players of the London club were crowding around referee Stuart Attwell. 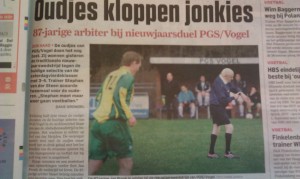 Screenshot of the newspaper article with photo of Jan Pronk.

“I’d have loved to continue whistling.”

87-year-old referee Jan Pronk who’s been substituted after twenty minutes in the yearly New Year’s match at his club PGS/Vogel between the first squad and the ‘oldies’ (former players of team one). (interview in Dutch newspaper Algemeen Dagblad)

“You need to think of your heart. Twenty minutes is long enough.”

Leen van Mastrigt, board member of the club, who substituted Pronk.