German youth inmates are trained to become referees. This project is supported by the Sepp Herberger Foundation, which focuses on the rehabilitation, disabled sports and interaction between schools and clubs.

“The prisoner-project ‘Anpfiff 2010’ (‘Kick-off 2010’) is new and the main goal is that prisoners learn to obey the rules and represent them on the field”, says a spokesperson of the Sepp Herberger Foundation to the Dutch Referee blog.

In two facilities of youth detention in the region Rhineland-Palatinate employees of the German FA (DFB) train the inmates. The idea of promoting soccer in prison was already there in the early days of the Sepp Herberger Foundation, which is founded in 1977. Herberger is a former German soccer player and coach. 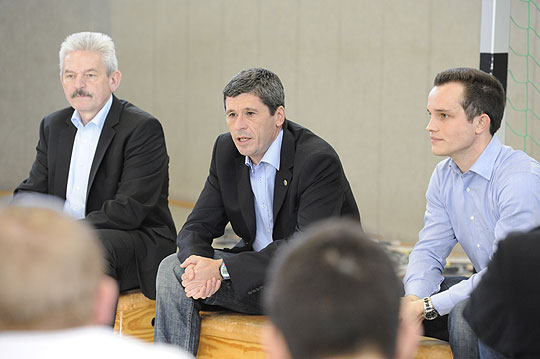 “Promotion of soccer includes the training of referees”, says the spokesman. The organisation is trying to make one uniform concept from all the projects in the German regions.

The SHF sees great opportunities for selected participants to change their role. “The motto ‘from rule-breaker to governing body’ describes the possible conversion perfect. It is for the detainees about learning rules and to represent them all up to, and enforce them.”

About 15 to 20 participants, who all have committed different sorts of crime, are trained by five employees of the soutwest German FA. They will have to apply the Laws of the Game in matches and will be examined by the officials.

Recently German former top referee Markus Merk visited one of the participating prisons and gave the now certified officials all a referee shirt. “It was a very interesting visit to Schifferstadt. Especially the many issues young people came up with have inspired me.” His advice to everyone: “Football offers you many possibilities. Use them.”

The official evaluation results are expected in 2011. “But everyone here is convinced that it will become a success”, says the SHF-spokesman.

Video suggestion (in German): footage and interviews with detainees.
Info (English): about the Sepp Herberger Foundation