The Scottish referees will use the Adidas Euro 2012 referee kits, like the German Schiedsrichter. German referees posed with the traditional black kit, but I kind of like the yellow and silver ones from the Scottish FA, sponsored by Specsavers. 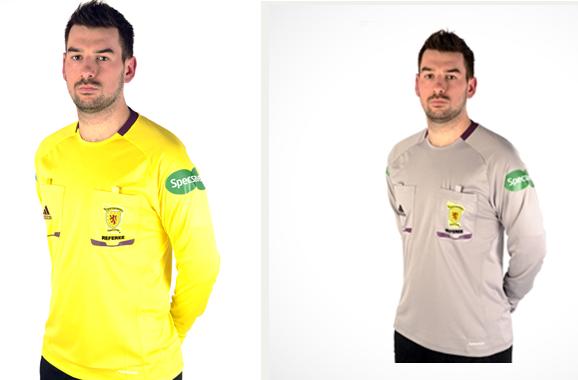 Photo with permission of www.scottishfootballdirect.com.

Barry Cook has been a talented goalie, even got 27 caps as youth international. This season, ten years after he stopped with goalkeeping, he has been promoted to Scottish top refereeing category. 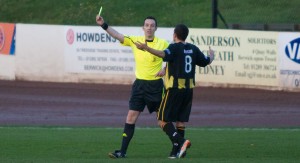 “My first season refereeing at the top category in Scotland has gone well so far”, says Barry Cook to Dutch Referee Blog.

“I have been refereeing since the age of 17 – I am now 32 years old – but combined my playing and refereeing until the age of 22. At this point I made the decision to concentrate on trying to get to the top level of refereeing.”

“I sometimes miss being a goalie but I love being a referee.” Cook has no regrets of his decision. “Being a referee was a choice and is not second best to playing football.”

His career as a goalie has brought Cook some funny situations as a fourth official in the Scottish Premier League, as described below by Hugh Macdonald from Herald Scotland . In this case Cook was the fourth man in a St. Mirren match earlier this season.

Two former international team-mates meet in a tunnel with a professional match only minutes away. There is a stunned look from Steven Thomson of St Mirren as he looks at his friend. His old mate is now a referee. 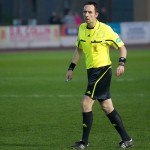 Cook thinks it’s a personal challenge each time to get all players in control. “My experience as a player has helped me greatly and I regularly come across players who used to be in my team. As a referee, I like to speak with the players and I am quite calm and confident even when under pressure.”