How to restart play after animal enters the pitch?

Good video example of the match Heracles versus PSV with referee Richard Liesveld. The answers follows after the marten left the pitch. 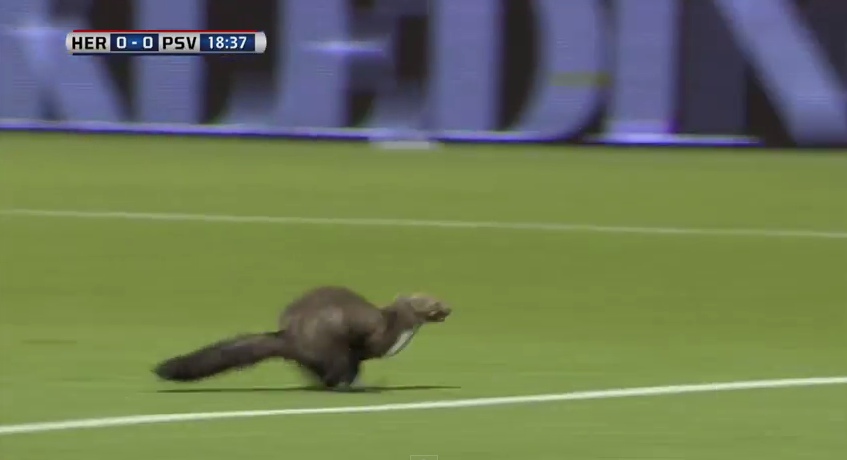 The answer is: a drop-ball.

Dutch referee Richard Liesveld could not referee his match yesterday because his car got on fire on the way to the football match Roda JC – Vitesse in Dutch top league. The referee’s car burned out completely.

Liesveld heared a strange noise while driving so he stopped at the first gas station, Dutch FA’s press officer said. He noticed nothing at first glance and wanted to continue, but then people who were near to the car warned him that his car was burning from underneath. The referee could get out safely, but was not able to take his referee equipment with him.

A witness says on Twitter that they couldn’t get closer (see picture above) because glass was going everywhere.

The referee talked about Twitter about the incident. “I was startled enormously. It’s so surreal if you see the car you just have driven in burned down in just five minutes”, tweets Liesveld.

Dutch FA found Ed Janssen able to officiate that match, so players didn’t have to go back home without playing. Police is investigating the case. Dutch FA thinks it’s just a technical problem in the car and not something which is planned by angry football fans. 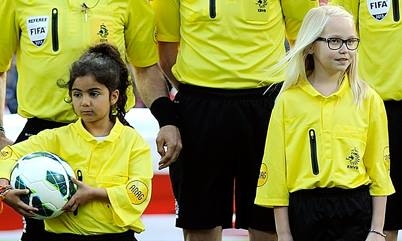 Referees who are appointed for the national supercups. A supercup referee overview per country:

The Belgian Super cup was refereed by Joeri Van de Velde. The match between RSC Anderlecht en KRC Genk ended in a 1-0 win for Anderlecht.

Germany
The German Supercup between Bayern Munich and Borussia Dortmund will be refereed by Dr. Jochen Drees. His assistants will be Tobias Christ (Münchweiler/Rodalb) and Christian Gittelmann (Albisheim). Fourth official will be Guido Kleve from Nordhorn. The match will be held on 27th of August at 8.30 pm (CET).

France
The French Supercup between the champion of the Ligue 1 (Paris Saint Germain) and the cup winner (Girondins Bordeaux) will be officiated by Belgian referee Jérome Efong Nzolo. Remarkable detail: the match will be held in Libreville, the capital of Gabon, the country where Nzolo was born.

The teams were surprised by the decision of the French Football Association. Nzolo was the best referee of Belgium in 2007, 2008, 2009 and 2013. He’ll be assisted by Evarist Menkouande (Cameroon), Sylvain Mouala (Gabon) fourth official Eric Otogo (Gabon).

Got this info so fast thanks to a Belgian referee blogger who send me an e-mail. Thanks! Check out her refereeing blog.

Everything seemed normal: Dutch referee team shook hands with players and officials of Dinamo Kiev and Sporting Braga after yesterday’s match in Europa League. But take a better look at the the Ukrainian official who kicks fourth offficial Richard Liesveld in the ass.

He sneaked away, but an Ukrainian press agency got it on tape. Click this video link: http://video.meta.ua/3406956.video. During the match head referee Björn Kuipers showed Andrei Shevchenko two yellow cards in ten minutes, which caused irritation amongst the Kiev officials.

Dutch referee Pol van Boekel has been promoted to category two on the international refereeing list. He’s on the Uefa list since 2007. Uefa doesn’t want to publish the full list at this moment.

The 35-year-old Van Boekel made his international debut during the U17 match Slovakia-Serbia on 26 March 2008. He’s officiated 19 official international games, including five Europa League matches.

Dutch international referees:
Björn Kuipers and Kevin Blom on the Elite List.
Eric Braamhaar on the Premier list.
Bas Nijhuis and Pol van Boekel on the category two list.
Richard Liesveld is a category three referee.
Danny Makkelie is on the cat. 4 list.

Pieter Vink, who was on the Elite List, stopped because he wants to give young refs a chance and because he got death threats via his daughter’s lunchbox.