In the recent Europa League round there was a situation which every referee could learn from. How do you deal with assistant referee decisions in the penalty area?

Check the following situation in the match between Borussia Mönchengladbach (Germany) and Villarreal (Spain) at the end of the video. The video quality is not good, but you’ll get a better idea of the situation. A striker tries to reach a teammate in front of the goal, but the ball got blocked by a defender. The ball goes in the air and a defender in his own penalty area tries to control the ball with his foot. He misses the ball and the ball bounces via the ground on his hand. The assistant referee raises his flag, but the referee disagrees with him and let play go on.

But is it smart to raise a flag for a penalty call? KNVB, the Dutch football organisation, had given a technical guideline for assistant referee decisions in the penalty area. Some tips for AR’s are:

In amateur football football you don’t have a headset probably, but you can make good arrangements with your assistant referee. If he follows the guidelines and proceeds to the backline although the ball or players are not, you should notice he’s giving a signal to you. Try to get eye contact with your assistant and then make your decision. 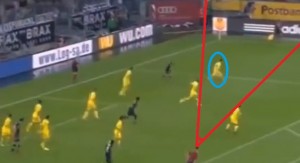 I hope you learned somethingon the assistant referee decisions in the penalty area.

The last question for you is: what would you decide on the “handball situation”? Penalty kick or go on?

Penalty takers try to mislead the goalie very often, but not all tricks work out as they were meant. Have a look at this bluff penalty.

Don’t know the league or competition, but that’s not important if I want to explain the rules of the game. UPDATE: check comment from Laszlo Sipos below for more information about the match.

The football Laws of the Game by Fifa state that ‘the player taking the kick must be properly identified’. For the viewer’s it’s at least not clear who’s going to take the kick.

UPDATE: At first, I quoted the Laws of the Game that this is a case where ‘a teammate infringes the football rules’. In that case:

But there’s an USSF Referee Memorandum which mentions an exception. In USSF Advice to Referees, Law 14, section 14.9 (pdf). It reads:

“If an attacker other than the identified kicker takes the penalty kick, play is restarted with an indirect free kick for the opposing team where the attacker illegally entered the penalty arc or penalty area, regardless of the outcome of any kick that may have been performed by this attacker.”

I can’t find this in a Dutch advices, but Rafal, an USSF National/Professional Referee (see his comments below), checked with the U.S, Soccer’s Referee Education Resources Advisor who answers all questions about the Laws of the Game. He says the advice is valid for all countries. Now I’m wondering why not all FA’s release the same advice.

This referee let’s the penalty kick retaken over and over again. Players won’t stop complaining, isn’t he just strictly applying the rules?

Teammates of the taker and as well as opponents infringe the Laws of the Game. Mostly by moving into the penalty area (or 9,15m circle) too soon. But also take a look at the goalkeeper during the penalty kick he saved. He moves forward to fast and is way in front of the goalline when the attacker actually kicks the ball.

Anyone an idea why the goal from the before last kick is not allowed? Last week, I’ve started a discussion about giving a yellow for players who pull off their shirt at amateur level. Anyone experiences with this situation? What’s your ‘record’ of retaken penalties in a row or do you just let it go?

Fifa has announced that a goal should be allowed when a penalty kick – as last action of a half or in a shoutout – is shot on the bar, then touches the ground and crosses the goal line. That’s why the Dutch Football Association KNVB has announced a new interpretation of the Laws of the game for next season.

Last weeks many referees discussed the match Dro and Termeno in Italian football. The referee allowed a goal. It now turns out he was correct, according to Fifa.

In 2009 the Dutch referee commission announced that a goal should not been allowed in the situation above. The PK situation was over when the ball touches the ground after been shot at the bar, was their interpretation. But they had some doubts about it and asked Fifa. That’s why they announced new interpretations for 2011/2012 (pdf). The Dutch FA stresses: “The rules have not changed, it’s just our interpretation.”

The Dutch Referee Blog will soon move over to DutchReferee.com. I’ll keep you posted.