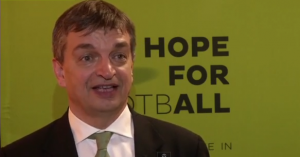 Candidate Fifa president Jérôme Champagne launched his future plans to make Fifa an organisation of the 21st century. He wants to introduce an orange card and a sin bin for players.

Champagne got backed up for his candidacy by Brazilian World Class player Pelé. The Frenchman helped run Blatter’s 2002 election campaign. Champagne wants to reform Fifa and bring more democracy in the world football organisation. There are also a few things he wants to modernise refereeing.

What do you think of the following suggestions:

View the interview with Champagne below.