There were some hilarious situations during the Olympic Games in Russia. Unexpected winners, missing roads and unfinished hotel rooms. Here’s a blog post with what referees can learn from Sochi 2014.

The winter Olympics has proven that facilities might not always be perfect. Hotel rooms were not finished and streets were not safe tweeted journalists.

Watch your step @Sochi2014 — I've noticed on walkway and on sidewalks that not all man holes are always covered. pic.twitter.com/a5Nv4wu5iA

I heared a Dutch sports journalist on tv that he drove the highway, the took the exit, but the road ended after two hundred metres. It reminded me of a tweet by a refereeing colleague last week. He was leaving the house one hour early because he knew the bridge was closed and he needed to take a longer route. As referee you need to be fully prepared and also know such things, because it would be ashame if you appear too late at your match. 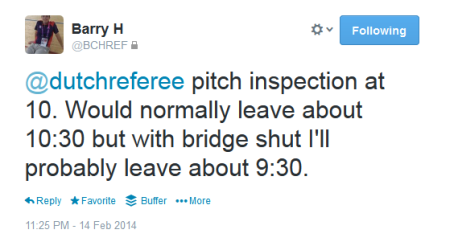 Be fully prepared for your match.

Get back up again after a mistake

Julia Dujmovits was the unlikely winner of the giant slalom final after her first run. The Austrian was 0.72 seconds behind Anke Karstens. But she got back up again after some errors in her first run and won from the German in the second run. “I just never gave up. … To be Olympic champion today is amazing”, she told afterwards. And there were many Olympics who made a comeback this olympics after some errors during this or previous events.

That’s what referees should keep in mind when they make a crucial error. Get back up again, and be ready for a better second half or next match. But sometimes it can take long to be at your best again. “I’ve been feeling down for a long time”, said Blom after he made a crucial mistake in the match between Scotland and Czech Republic. “It eventually took more than a year. But I had to go on. When you referee a match you need to clear your head.”

Work on the details of your appearance

Only 15 year-old, Julia Lipnitskaia, won the gold medal at figure skating. Ian Chadband from the Telegraph describes her in a way that she “appears to have that same rare gift of charisma, charm and athletic skill in a precocious package”. Dedication to the small things can make an appearance great. As referee you should pay attention to details as well. Just a few examples: