I’ll try to show you more stories of young talented referees on my blog. That’s why I asked some questions to Mitchell Terry, 17 years old and living in Wootton Bassett, Swindon. He is a level 7 referee currently affiliated with Wiltshire FA. He became a qualified referee at the age of 14 in November 2011.

Mitch Terry tells about his career: “I have always wanted to be a referee since a young age and I had been part of my local football club (Wootton Bassett Town FC) all my life and played for them for 10 years in the youth section. The club ran a few adult charity matches throughout the year to raise money for cancer and a few people who had passed away in the club and thats how I first got into refereeing as I would always be the linesman for the matches and this started at 9 years old. Since then people in the FA have recognised me and pushed me to take the course when I reached 14 and I haven’t stopped since.” 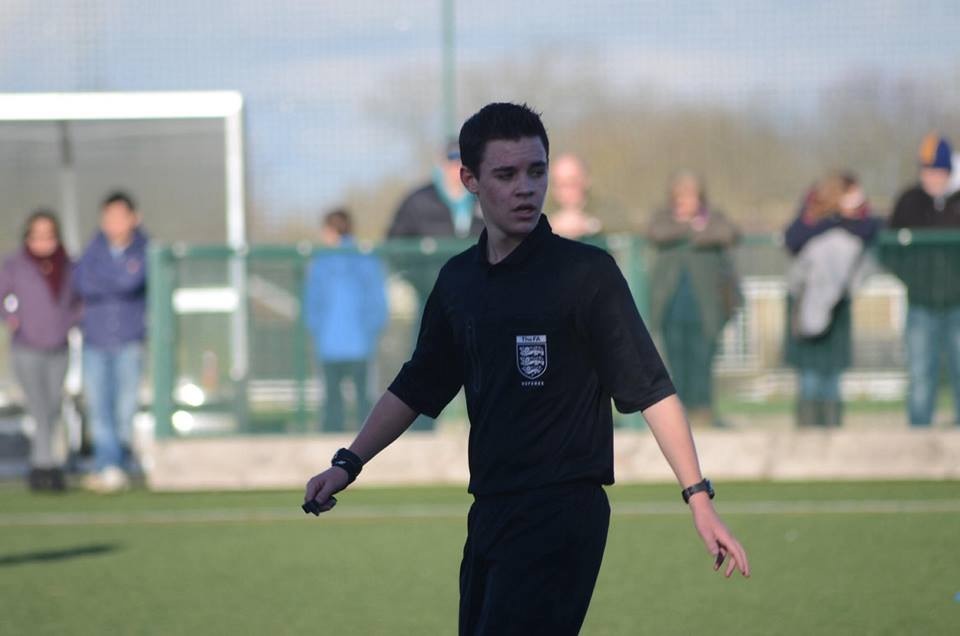 “Last season was special for me as I was selected to officiate on the Hellenic Football League (Step 5) at the age of 16. I also became part of the ‘Nerf Junior Premier League‘. I was easily doing 4 games a weekend which consisted of the Junior Prem on a Saturday morning, a Hellenic game in the afternoon then a Swindon Town FC Academy match Sunday morning with the Wilts FA Referee Academy and then Sunday afternoon a womans or youth match to finish the weekend off. Then I could have a Hellenic mid-week game and I really enjoyed it as I was becoming more and more experienced every week, working with new officials and going places I couldn’t imagine i’d be going at 16 years old.”

“Last year, I was selected to be Assistant Referee on a Hellenic Cup Final on my first season on the Hellenic and I have also been selected two years in a row to referee the North Wilts Youth and Minor League Cup final at the Swindon Towns Stadium ‘The County Ground’. I was also being selected by the Junior Prem chairman to referee there finals at Cheltenham Towns stadium as well.”

“I haven’t really had an preparation for the 2014/2015 season with the odd pre-season game and abit of fitness but nothing major. My season started on Saturday 9th August on the Hellenic so it was an early start, but I am really looking forward to the coming up season a I am also going for promotion to Level 6.”

Mitch Terry: “My local RA (Swindon RA) holds a meeting every month where referee’s get together and talk about experiences, how they were managed and how it could of been done different using workshops and quizes. At Swindon RA we have a wide band of qualified officals which benefits everyone hugely. Also every August Wiltshire FA holds an RA-FA day which is a whole day of workshops, training sessions and meeting other referees from all over the county. Also a few local officials from the professional standard are there to offer their services.”

“My goals in refereeing is to work as hard as I can and get to the highest level as I can achieve in a relatively quick time. I dream of one day becoming a Premier League Official and then finally becoming a FIFA elite referee but that is only dreams at the moment. I hope that one day i’ll be typing another blog out for Dutch Referee explaining how my match went in the FA Cup final or how my World Cup was.”

PS: I hope you can write that story soon for the Dutch Referee Blog. I wish you all the best with your referee career and thanks for your response for the blog.