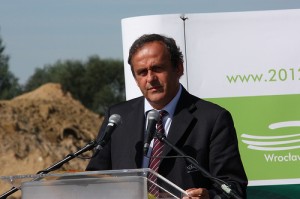 ‘Referees in the media’ will be published at the beginning of the week on the Dutch Referee Blog and provides remarkable or interesting quotes and links to articles worth reading. MBWN6ZY4JZVP

“But if they want to have referees in big European competitions we will give priority to those coming from associations who are implementing the system so that there is understanding among the team of five referees.”

Michel Platini’s advice (‘not a threat’) to European countries about using extra assistants in national leagues.

When I was about 22, they told me I could play again but it was too late – I stayed as a referee!”

Doctors gave Slovenian referee the good news that he could play football again after a six-year break, but he just found love in refereeing. That resulted in Skomina’s Super Cup appointment last weekend.

“AFC know full well to provide the best education to us so that we can constantly be at our best in carrying out our duty as referees.”

The Asian Footbal Association started a digital education platform for referees. Read more about the so-called ‘The AFC on the field’ portal on their website. Quote is by Iranian referee Alireza Faghani.

Because of my honeymoon an overview of the last four weeks.

“I think in the future we will not stop the match, but we will give information to the referee, the (match) delegate and the clubs, and say that we suspect that this match has been fixed, and that we will be monitoring this match even more closely.”

Norwegian FA president Yngve Hallen told Reuters about informing a referee when they suspect a match result is going to be fixed. As Reuters wrote: “The FA then took the unprecedented step of cancelling the game between Ullensaker/Kisa and Ham Kam.

“I am not just wholly against goal-line technology, I am against technology itself because then it is going to invade every area of football.”

Uefa president Michel Platini still fears a ‘flood of other forms of technology’ after goal-line camera’s are introduced.

“I know that Portugal’s Pedro Proença refereed the 2004 UEFA European Under-19 Championship final and he went on to take charge of the UEFA Champions League and UEFA EURO 2012 showpieces, so that is all the inspiration I need.”

Danny Makkelie is inspired by Pedro Proença. Next week he’ll make his debut in the Champions League.

“I played football for five years before I had to choose between playing and refereeing. I felt I had more chance of reaching the top level as a referee so I went for that.”

French female referee Stéphanie Frappart thinks it’s possible to climb up to Ligue 1, French highest level, although that would be a ‘very difficult and huge step up’.

This is the route for me to my personal destination which is officiating in the World Cup and Asian Cup. I think I’m on my way.

Chinese referee Wang Di after his promotion to the Asian referees Development Group.

“The referees should get much more help because their mistakes are seen all over television.”

Uefa president Michel Platini favours use of goal-line assistants. At the same moment he also stated that he’s against the use of technology in football.

“I will always remember Giulio not only as a great referee, a competent and passionate administrator, and a respected match and referee inspector, but also as a man of authority and character who left his mark on Italian refereeing and contributed to the development of refereeing at European and global level.”

Fifa president Sepp Blatter after Giulio Campati passed away on the age of 88. Campati was an international referee and was a member of both the Fifa and Uefa Referee Committee from 1968 to 1992.

“The fifth man opened his mouth, that’s not what they normally do.”

PSV Eindhoven player Keven Strootman was surprised that extra assistant Anthony Taylor advised referee Stuart Attwell to recall his decision to give a penalty kick. Correct call by the way.