Referees will not be no blood tests for referees who officiate in European competitions. Uefa announced blood testing across all its competitions in 2013/14, but confirmed to the Dutch Referee Blog that match officials will not be tested.

Uefa’s press officers could only say this: “There are no doping tests for referees.”

Players were only tested before during the Uefa EURO 2008 and Uefa EURO 2012 final tournaments. “Blood testing will take place both in and out-of-competition, and at a doping control players may be asked to give only urine samples, only blood samples, or both”, Uefa announced.

Jiri Dvorak, FIFA’s chief medical officer, announced last year during a medical conference in Budapest there might come an anti-doping program for referees. “We do not have an indication that this is a problem but this is something we have to look at”, he said to AlJazeera. “The referees are a neglected population.” 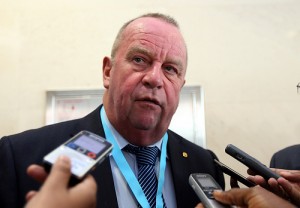 Michel D’Hooghe, head of medical committee of Fifa, supported Dvorak: “The referee is an athlete on the field so I think he should be subjected to the same rules.”

What do you think: should referees be tested for doping or not?