Assistant referee John Brooks has some advice for the Manchester City players shaking his hands after the match against Arsenal: Go to your fans, who paid a huge fee for a ticket, and thank them for coming.

Fans of Manchester City were showing banners to protest against the high prices for this match. Football365.com says that Manchester Citry returned 912 unsold tickets (price 62 pounds) for the match at the Emirates Stadium against Arsenal.

Mike Dean’s linesman John Brooks has seen the banners too. After James Milner and Joe hart shook his hands, he speaks with Joleon Lescott. Brooks: “Go and see them. They’ve paid 62 quid over there, go and see them.” 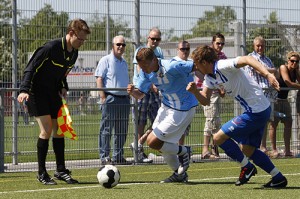