Referees from Utrecht are the Dutch Laws of the Game Champions 2013. The team won for the 4th time in a row the national championship for football rules specialists. 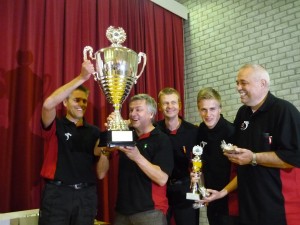 Utrecht referees win the utch Laws of the Game Champions 2013

Marco Ritmeester from Utrecht was the individual champion with 124 points out of a possible 140.

The referees from Utrecht only won by 7 points from De Langstraat after a full day (10am untill 5pm) of questions about the football rules. Referees get questions they never thought about before or situations which are not likely to happen, but things you should be prepared for as a referee.

For example the first question for the referees: How many cards can a referee give to active players during a competition match on highest amateur level before he needs to abandon the match?

I also took some pictures during the Dutch Laws of the Game Champions 2013.
Check out a photo album of the tournament on Facebook

Later this week more about how to organise such a championship for your country and how the referees are being tested.