“I got infected by the virus of refereeing in secondary school at the age of 15″, says Gert Deckers.

The 37-year-old referee from Belgium is officiating in the highest leagues of both futsal and outdoor football. He talks about the differences in an interview with the Dutch Referee Blog.

Deckers has already gained a lot of experience, in a career which begun at 22 years ago. “I organized the annual football competition between the different classes and I also whistled the matches on the playground. At the finals there were always a lot of people, which was reminiscent of a full stadium.”

“I became an active futsal referee when I was 18 – now 37. And soon I noticed that people thought I had talent for this. Officiating in field soccer was not a case yet. After my studies to become a gymnastics teacher – I was 22 by then – former Belgian football referee Hayen Ghislain noticed me. He motivated and guided me to give officiating a try in outdoor soccer.” 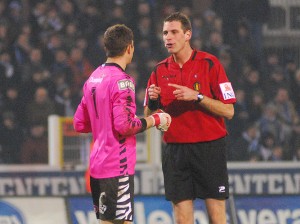 “Even here, I progressed like an express train. In the beginning years at least. When I moved to the national series, I faced problems with adjustment to that level. It finally took me about five years to accustom. Eventually, I arrived at the highest national level in both disciplines.”

“Of course I’ve to combine my hobby with my job as a sports teacher in special education, I can’t do it without other employment. It is compatible, but sometimes difficult too. The combination of work, training, competitions, family (I am married, have a daughter and the second is on it’s way) gave me a pretty busy agenda. I usually whistle two matches per week: one in futsal on Friday night and one field match in the weekends.”

“There is definitely a difference in whistling in outdoor football and futsal. You see it partly At the one hand, the technique of refereeing is different. But also the mental perception is not the same.”

“I see officiating in futsal as an extension and extra practice for the arbitration on the field. It’s a lot more technical and the continuous concentration is required as good refereeing training.”

“During outdoor matches, there are some periods when the concentration level reduced due to various factors, for example in silly games of moments that play has stopped. That lack of concentration should really be reduced to a minimum. In Futsal things happen much closer after each other, with constantly physical duels, so you always need to be focussed.”

“In futsal I try to approach the players with the same style I use for field soccer: that means much contact with the players, the so-called management. I am a talker and try to tackle problems preventively. This is a lot easier in field football, because there are more possibilities to walk along a player whom you want to talk to. In terms of Futsal, you are bound to move up and down the line.”

“The pressure that referees are imposed to, is so different between the two disciplines. Futsal at the highest level is not that much appreciated and the concerns are much bigger compared to outdoor football.”

“Moreover, more media coverage and the camera’s who are always present, do provide extra presure. I think the trick is to keep away from them. In futsal, I don’t have to take the media exposure into account that much when I prepare for a match.”

“I’ve partly reached my goal in refereeing, which was to become referee in the highest leagues of both disciplines. Because of my age it’s too late for an international career now. The goal I’ve set myself now is getting the confirmation that I’m good enough for this level, that I can uphold my position here as long as possible. That’s how I want to gain so much energy and fun out of a hobby run out of control.”