Kevin Blom went from heaven to hell after he wrongly awarded Czech Republic a penalty at Hampden Park, which costs Scotland a place at the European Championships. Now he talks about the incident with Algemeen Dagblad, a Dutch newspaper.

Check out the video and read further below (if it’s not playing at right moment, check at 7m25s):

“If I had extra assistants at that moment, my career would have gone a different way”, Blom told the newspaper. The Dutch referee officiated European Championships Qualifier between Scotland and Czech Republic on 3rd of September 2011. In the dying minutes of the game he whistled for a foul on Jan Rezek and gave his team a penalty. Czech Republic scored an important equaliser (2:2). “I’ve been fooled”, Blom says. “While watching the video footage of the game, my world collapsed.”

Blom says that this decision has influenced his life very much. “I’ve been feeling down for a long time. It eventually took more than a year. But I had to go on. When you referee a match you need to clear your head.” 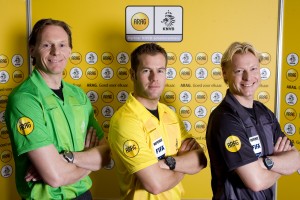 The refereeing team was about to go have some dinner in town, but was advised to stay at the hotel. Kevin Blom watched the dvd of the match immediately and fast-forwarded to the incident in the last minutes. “I saw it was a dive. I couldn’t eat during dinner and didn’t even sleep. You’re lying there, thinking, sweating.” Many things crossed his mind. “Will I miss the European Championships now? Will this influence my career?” Two days later he Pierluigi Collina called how he did and also told him he would be withdrawn for his next Champions League match. Then he knew.

Blom says he has closed the subject now and he’s still ambitious as a referee. He still wants to get the best appointments. “I’m doing fine now. No strange things during last season and I can’t wait for the start of next season.”

“I know it’s not easy to clinch another final match gig because there are so many good referees in Asia now. But I’m sure it’s the dream of everyone who will soon hang his whistle and I’m one of them.”

Singaporean referee Abdul Malik Abdul Bashir who will turn 44 on Wednesday has two more years to achieve his goal.

“There has been a personal discussion with the referee. He admitted everything, apologized, and said it does not happen again.”

Says former Bundesliga referee Frank Fleske, now regional director, about a local referee who has been suspended because of anti-semitical posts on his Facebook account.

“That player is cheating at that moment, but I belong to the 22 best referees in Europe. I have to be prepared with my assistants for these kind of situations. The aftermath of that game was huge.”

Referee Kevin Blom is reviewing the past year and talks about the incident in the match between Scotland and Czech Republic. In the last minute he awarded a penalty kick to the Czechs, from which they scored the 2:2.