Ingvar Gudfinnsson has quit international refereeing only two years ago, but he misses it a lot. The Icelandic assistant referee now helps other referees to reach the top.

The AR has officiated with center referee Kristin Jakobsson some very nice teams: England, Ajax, Werder Bremen, Liverpool – to name just a few. Who is he and what is he doing for a living now? Read more below. 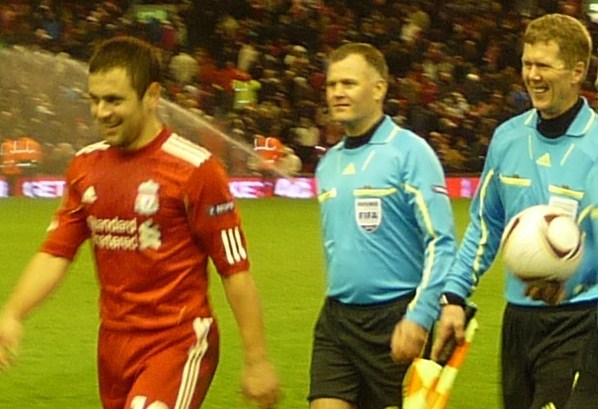 Ingvar Gudfinnsson: “Now Iam working in school for children from 6 – 15 years old, and I work as a janitor, I take care of the building and try to help as much as possible. And also I work with referee, I am a fittnes coach for them, and we are training three times a week now in winter time. We are two times outside on artificical turf and one time innside on a 200 meter track and doing strength traning . I have also worked in Core in Geneve for UEFA and that is very nice.”

Ingvar Gudfinnsson: “My career was a good experience for me. My best experience is all those games in Europe and working with others refs and all good friends that I have after refereeing.”

Ingvar Gudfinnsson: “Yes I miss it. But I can’t think about that now, because I decided to quit refereeing when I was 45. But I miss refereeing at high level.”

Ingvar Gudfinnsson: “I think refeering is on the right way. Here in Iceland we have a lot of new refs and few female refs, but not so many.”

“Our biggest problem in Iceland will be our FIFA refs, because of all the new countries in Europe. There are more Fifa countries now.” That means it’s more difficult for Icelandic refs to reach the top. “Iceland got 4 Fifa refs and 7 assisants, one female assisant and one futsal ref. But only one at high level, the other is in 3rd catagory. So it will be hard for our new refs to reach the top. But we wil see how it will go in the future.”