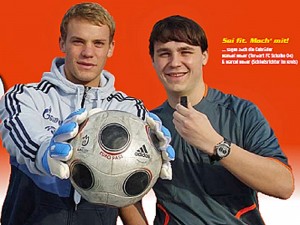 As I sat and reflected on it all at the closing ceremony, I thought about how honoured I was to part of such an event and there was a small tear in my eye as they extinguished the Paralympic flame.

Ross Haswell has been appointed for the Paralympics final match. He wrote two articles about experiences at the events in London.

“Select group match officials are emailed on a Monday every week with the upcoming appointments. Only then can they confirm, or all to often, postpone social arrangements with wives and friends. Yes, referees have social lives, too.”

Graham Poll about referees being normal persons with social lives too. In his weekly column on Daily Mail’s website.

“Less than 24 hours to go to my game. Today was rest day and I got a haircut and a clean shave to make myself look good for the game. The assessor will be on the lookout for even the finest of details that make/break a referee’s game. The change is also nice for the confidence.”

“The pressure was already huge. One can as referee not rest because of your experience, you always need to prove yourself in every game.”

Knut Kircher about the match between Borussia Dortmund and Bayern Munich during last season, in German referee magazine Schiedsrichter Zeitung (Referee Newspaper, ed.). The German referee was named the best referee of the last season.

“That it went so well after my comeback last season, pleases me very much.”

Christine Baitinger is back in German women’s top league after she paused a year afther the birth of her son. He was immediately after comeback named as Women’s referee of the year in Germany.

Sorry for the delay, guys. I’m going to marry later this month and it takes some time to arrange things. Will provide you with some interviews and blogs later on, also on a more regular basis. Here are some quotes of the last weeks for you. I hope you’ll enjoy.

“The referee has become someone who applies the rules. I rarely see real authorities, referees with charisma.”

Charles Corver, referee at the 1980 World Cup in Italy, dislikes Uefa’s decision that referees may not explain their decisions to the media. He also wishes that referee could give just a warning and not a yellow in sportive maches. Quotes in Dutch newspaper Trouw.

“I’m a very calm person, and a big match like Friday’s doesn’t affect me that much.”

Carlos Velasco Carballo before the opening match at Euro 2012, where he send of Greece player Sokratis Papastathopoulos after two unjustified yellow cards.

“I have been involved in refereeing since I was 14 and this excellent news makes that commitment all the more worthwhile.”

“The most surprising inclusion in the list after disappointing Chief Refereeing Officer Pierluigi Collina earlier this year when refusing a penalty in the Milan v Barcelona Champions League quarter-final and then defending his decision on TV. He is very ambitious and very confident.”

Former English top referee Graham Poll gives his verdict about the Euro 2012 referees. Read his opinion about the other referees here
. Got this thanks to ‘The Referee’, a worth following referee blog by John King.

Every boy dreams of walking onto the hallowed turf of Hampden and I have now had the great privilege and honour of fulfilling this dream.

Scottish Assistant Referee Charlie Smith blogs about his experiences as cup final AR. He blogs about the week before the final from the moment he heard hewould be there.

“That’s absolutely ludicrous, trying to protect the poor performances of the officials they supply us. It’s a joke.”

Mark Hughes laughs at the British FA because it released a statement that it is in favour of the use of technology when the match QPR – Bolton wasn’t even finished. During the match Martin Atkinson and his AR missed a clear goal.

“Webb and his officials should be commended on their handling of Muamba incident.”

“After the match we change clothes, fill out the match form and send it via iPhone.”

International referee Danny Makkelie from the Netherlands on the modern way of sending the match report in the weekly section on the Dutch FA website.

“It was a real shock and probably the most disappointing decision of my career.”

Graham Poll about missing the Euro 2004 in Portugal.

“The top two is the same every season, of course.”
One of the players in the Scilly league on group of islands on the south-western tip of England. The comptition contains two teams who play each other 16 times a season, all under supervision of referee Paul Charnock. Read more about this in the Fifa Magazine (page 56 and further)

“Let adversity be your catalyst and greatness will be yours.”

The motto of Adrian Skeete from Barbados in an interview with this blog.

“This will ensure that referees’ education is of utmost importance for the referees and assistant referees to perform correctly and perfectly in the field of play and also to update themselves with the latest technical knowledge in assistantship.”

“They often asked me after the game what I thought of the arbitration, but I never said anything negative to them and definitely not that they may have caused loss or win of a match.”

Says François Eelen, who was referee assessor in Belgian top leagues until last week, in an interview with Nieuwsblad. He regrets the way he was set aside just two days before the start of the competition started.

“There has always been a misguided desire to keep 22 players on the pitch and, as a result, difficult players often get away with too much and then believe they can repeat their actions without sanction.”

says Graham Poll in his weekly referees review on Daily Mail. He admits he used to do it with some ‘irksome’ players too.

“Coaches must learn to live with errors.”

In a opinion article by Reinhard Schüssler, head of sport at WAZ Mediengruppe (Media Groupe, jth).