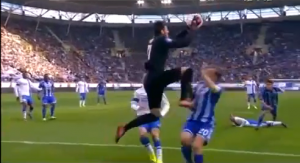 The goalie’s knee: protecting himself or endagering an opponent?

The goalie’s knee when he’s coming out of the goal trying to grab the ball out of the air. The football referee need to decide whether he is protecting himself or endangering the opponent.

Bending the knee forward as a goalie when coming out of the goal is a very common technique.

A special football website for coaches says: “When retrieving balls in the air, it is a good idea for the goalie to jump with one knee pulled up in front of him. This discourages players from running into him and protects the goalie simultaneously.”

And a website for goalie describes the technique of grabbing a ball out of the air as goalkeeper: “The whole body should now be turned and facing the flight of the ball. Leg facing the field of play is bent and held at a 90′ angle. When the leg is bent and held this way it prevents opponents from getting in and jostling the arms and hands.”

You might think: why questioning this technique? The video below shows why. A referee comes forward with his knee and it smashes an opponent in the face. That guy swallowed his tongue and almost choked – luckily one of the opponents could get it out of his throat.

How would you deal in this situation? Is the goalie making an offence? Please comment!