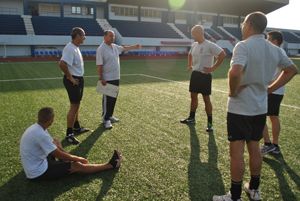 Gibraltar FA has joined Uefa’s Referee Convention. This is another step for Gibraltar to get an international referee. In 2013 Gibraltar gained membership of the Uefa. “I am extremely thankful to my fellow colleagues and UEFA personnel for supporting me in the whole process in achieving the standards expected by UEFA and having been accepted today into the Referee Convention”, head of refereeing Adrian Bacarisa said. “We are definitely working towards making our referees better.”

I interviewed Adrian Bacarisa earlier about the future if the Gibraltar referees. Below you can find that interview.

Adrian Bacarisa, the Head of Refereeing in the country, hopes that match officials from Gibraltar will become international refs in 2016. Read the interview with him from

How important is it for refereeing in your country that Uefa approved Gibraltar as member?
“Its extremely important for Gibraltar Referees. UEFA membership will help in development of our referees to a much higher level on a par with other UEFA member associations.”

Young referees from Gibraltar will follow a Uefa course in September. Who are the guys? What do you expect after that?
“A refereeing trio will be participating in the CORE 21 programme in October. They are currently working on their fitness levels towards the CORE programme. The trio are: Referee – Tim Reoch, Assistant Referees – Jason Barcelo & Stewart Bonavia. We expect them to be in the Referee international List come 2016.”

In 2014 the Gibraltar RA made this video to recruit referees. I love it.