The tv show presenter stresses that Dutch referees have been active on the most important international tournaments. Dick Jol and Mario van der Ende for example. “It looks like we (The Netherlands, jth) will not be represented at the upcoming World Cup in Brazil”, says Evenblij. “Despite the level of professional football in Suriname is way behind of Europe, in that country lives a big talent: Enrico Wijngaarde. He’s been placed on Fifa’s Elite List and prepares for Rio the Janeiro.”

It’s not clear to my what information Evenblij has based this conclusion on. Wijngaarde is not on July’s “Open list of prospective referees & assistant referees for the 2014 FIFA World CupTM” (pdf), and Björn Kuipers is.

(I’m not sure whether Dutch tv shows are only available in The Netherlands. Otherwise you can also watch the Dutch interview with Enrico Wijngaarde in tv show Bureau Sport.) 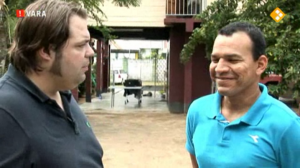 But how did he start? Enrico Wijngaarde: “I’m busy with refereeing since my youth. Actually, I was walking with a whistle in my mouth when I started playing football.”

TV host Frank Evenblij: “How is to be the best referee from the Caribean?”

“It feels good. It’s not that heavy to be at that level, but to keep there. You need to be up-to-date with your knowledge and fitness. I don’t know why Dutch referees are not selected. It’s determined per region and my is ConCaCaf.”

A local football journalist in the Republic of Suriname is very positive about Wijngaarde’s chances to be selected for the World Cup. “He’s the best in Suriname and he’s head and shoulders above many referees in the region.”

Wijngaarde doesn’t see it as a big problem that the level of football in his country is not high. “My attitude is good and I easily can make the big transition. It’s easy for me to adapt to big matches.” He for example refereed big international matches in the ConCaCaf zone.

One of his matches was with David Beckham. “Yes, we met. It’s great to meet great players like him. But during the match when I apply the Laws of the Game every player is just a player”, says Wijngaarde. “I don’t make any distinction, even if it would have been my brother. He’d get a yellow or red card too. I’ve that attitude since I started in my youth.”

Wijngaarde calls the violence in football and against referees “very sad”. He has heard about the tragic incident about Richard Nieuwenhuizen, the linesman who died after an attack on the football pitch. “That’s an issue here too. When I just started I’ve been hit by a player who did not agree with a decision. I was knock-out and needed to go to the emergency unit of the hospital. The man has to spend six months in jail and was suspended for life.”