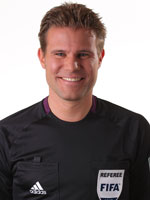 Felix Brych will referee 2014 Europa League final. Uefa just confirmed it. “Brych will be assisted by his fellow countrymen Mark Borsch and Stefan Lupp. The fourth official is Milorad Mažić from Serbia and the two additional assistant referees, Tobias Welz and Bastian Dankert, are both from Germany. A German reserve assistant referee – Thorsten Schiffner – completes the refereeing team lineup.”

Last year’s final was officiated by Björn Kuipers from The Netherlands who will referee the 2014 Champions League final.

Who are the best referees of the 2012-2013 season in your country? An overview of the best football match officials.

I’ll update the blog post if other referees are names by their association or in a newspaper or football magazine as referee of the season. Let me know who was elected in your country and I’ll add it below.

The Netherlands
Referee Bas Nijhuis has won the trophy as best referee in Dutch Eredivisie. The Uefa Elite Development referee scored just enough points to keep in front of Björn Kuipers. Kuipers had also a top season because he refereed the Europa League final last week. Both refs were also amongst the best referees of the 2012-2013 season in another “referee table”. Former international referee Mario van der Ende scores the Dutch referees each weekend and Nijhuis was also here the number one, followed again by Kuipers.

Belgium
Jérôme Efong Nzolo has been chosen by Belgian professional football players (288 of them voted) as referee of the season. It is the fourth time he wins this trophy. The previous wins were in 2007, 2008 and 2009.

Germany
Felix Brych was named referee of the year in Germany. He could celebrate this title with an appointment at the Confederations Cup this summer. Herbert Fandel, German referee boss, about Brych: “He is one of the European top referees.”

Female referee of the year in Germany is Riem Hussein. Fandel about the female winner: “Riem Hussien belongs to the best referees in Women’s Bundesliga to the best referees. That’s what she has confirmed last season. She also impresses with constanly high level performances in international women’s matches.”

Referees need to drink too during the match, but that ain’t so easy. For Felix Brych during last weekend’s Bundesliga match for example.

Red after just 87 seconds. It happened to Youssef Mohamad from 1. FC Köln at the opening day of the German Bundesliga against Kaiserslautern. No one got a red one faster in the German top league than the Lebanese player.

Referee Felix Brych spoke to weekly magazine Der Spiegel: “When I whistle for a foul, I can’t do anything else. The rules give no opportunity for a different interpretation.”

Good piece of refereeing, but it’s not a record Mohamad will be proud of. The German elite group referee added: “After two minutes – that is hard.”:

I never had to give a red card so fast. Whom of you did?