Björn Kuipers was a football player every referee would hate. The 16-year-old captain of his team couldn’t stop whining at the man in black about wrong decisions. Not once, but e-ve-ry match. As a player he was the complete opposite of the referee who got appointed for the 2014 Champions League final due to his cool and calm style of refereeing. After Leo Horn (1957 and 1962), Charles Corver (1978) and Dick Jol (2001) the 41-year-old Kuipers is only the fourth Dutch referee who’ll referee the final of the biggest club competition in Europe. In 2021 he reached his pinnacle, as first ever Dutch referee in a final of a European Championship.

“I was very emotional when I heard that I’d been given this final,” he told UEFA.com. “I hoped to get the chance to referee a EURO final, and I’ve worked hard with my team to achieve this. It’s really a milestone, a dream, an unbelievable moment and a big honour.”

After officiating the UCL final, Björn Kuipers officiates at the 2016 Euro’s (read how he prepares for a big tournament with his Team Kuipers), his second Europa League final and the 2018 World Cup. In the latter he’s a fourth official in the final. The Dutch referee has one big goal which is refereeing a final at a European or World Cup. He will make history on July 11th 2021, because then he whistles for the start of the Euro 2020 final between Italy and England.

But how did hye become a referee? More on that below the image.

Björn Kuipers wins golden whistle as best referee. Who is the best referee in your country?

Substitution that changed his career

At a certain moment during that short football career he got, to his surprise, substituted, he once told newspaper de Volkskrant. His dad Jan Kuipers, a referee and supermarket owner as well, who rarely whatched his son’s matches, summoned the coach to get his son of the pitch. His behaviour on the pitch was no longer tolerated by his dad and he told him to face the difficulties of being a referee. That was the start of a so far very succesfull refereeing career.

In January 2014 Björn Kuipers from Dutch town Oldenzaal was told he would be one of the referees at the World Cup in Brazil and on the 7th of May he got a message from Uefa referee boss Pierluigi Collina that he’ll be the referee of the 2014 Champions League final between Atletico and Real Madrid on the 24th of May in Estádio da Luz in Lisbon. “Being on the pitch during the Champions League final is the highest achievement in football for players and also for referees”, he told after the appointment. Kuipers will be assisted by Sander van Roekel, Erwin Zeinstra, Pol van Boekel and Richard Liesveld.

Improvement as a referee

After his father’s advice to try refereeing Björn became an amateur referee for theDutch football association KNVB in 1990. It wasn not always a pleasant journey towards professional football. Moments of dry heaving. Matches with 14 cards. Disrespect. It took him eleven years – with a one year break because he went abroad for his master degree in Business Administation – to reach the professional football level. His first professional match was Telstar versus Eindhoven in the Jupiler League, Dutch second level. He made his debut in the Eredivisie at the age of 32. A group of young referees entered the A-list and Kuipers as one of those talents. “Referees that are good, can move up quickly”, he told NRC after his fourth match on the highest Dutch level. “I know almost all the players, but they also know me apparently. They even called my by my first name, that actually surprised me.”
That was just nine years ago. Now Björn Kuipers is the talk of the town in The Netherlands. He even give a press conference before he moves to Brazil for the World Cup, because “otherwise he wouldn’t be able to respond to all interview requests he got”.

But wat are the success factors of Kuipers career? As manager of three supermarkets with about 260 employees and owner of a barber shop he has got the leadership skills a referee needs. “But I’ll never be bossy”, Kuipers says. His work and refereeing motto is to let people do what they are good at. Kuipers gives his assistant referees Sander van Roekel and Erwin Zeinstra much freedom on the pitch to call for fouls and he supports their decisions. It is no coincidence that the KNVB announced that “team Kuipers” will go to Brazil and “team Kuipers” will referee the Champions League final.

The career of Björn Kuipers

Björn Kuipers officiated five years on the highest national level before he became a international referee in 2006. Only three years later he became an Uefa Elite Referee. 2013 was a great year for him with the Europa League final between Chelsea FC and Benfica in the Amsterdam Arena. Later that year he officiated the Confederations Cup final between Brazil and Spain.

All these referee successes were not possible without the support of his wife, whom he married eleven years ago, and his two children. “I’m away from home a lot”, he told Helden Magazine. Kuipers even missed 6 of his daughter’s 8 birthdays because he was away from home for a football match. “But it never causes friction. I don’t know what should do without my wife.” Kuipers’ wife follows each and every match, but normally doesn’t go to the stadium. She went to the Super Cup in Monaco and the Europa League final in Amsterdam. “She and my coach Jaap Uilenberg are the first people I call after a match.”

Kuipers’ two children, his 8-year-old daughter and a 4-year-old son, are not old enough yet to be like their dad on the football pitch, constantly whinging at the referee. “My daughter doesn’t even care about football so much”, Kuipers once said. “But I think, although they do not show it publicly to others, that my children are very proud of their dad.”

“Let me think about that after the EURO,” he says to Uefa a few days before the Euro 2020 final. “We’ve seen it all – we’ve travelled across Europe and around the world, we’ve refereed great matches with great players and great coaches. It’s a dream to be a referee – it’s a dream to be refereeing a EURO final. I’ll look after the EURO about what comes next as far as refereeing is concerned.” 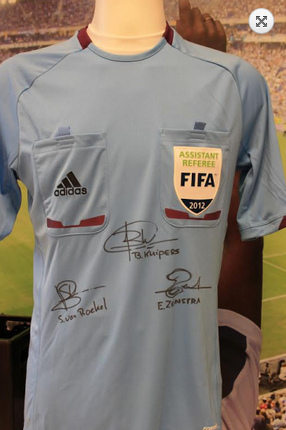 Buy Zeinstra referee outfit for charity Serious Request. The highest bid is now on evening of the 24th of December: 255 euro’s.

The referee shirt from assistant referee Zeinstra is used during the European Championship of 2012. On the shirt are also the signatures from referee Bjorn Kuipers and his other assistant referee Sander van Roekel.

You can place a bid on Marktplaats, a Dutch version of eBay until 6pm Central European Time on the 25th of December. Go to Marktplaats.

Serious Request is a charity event from Dutch radio station 3FM. Three deejay’s are locked up in a glass house and will not eat for six days. They only get fruit/vegetable shakes. Listeners can request songs by paying for it. The money goes to the Red Cross. The theme this year is “Let’s clean this shit up”, a campaign against child death from diarrhea.

Björn Kuipers is appointed as referee of the Confederations Cup final between Brazil and Spain next Sunday. His assistants (as always) are Sander van Roekel en Erwin Zeinstra.

The refereeing team refereed a group stage match between Nigeria – Uruguay at the Confederations Cup. Kuipers and his assistants also officiated the Europa League final between Benfica and Chelsea. The match will start at 7pm local time on Sunday 30th of June in the Maracana-stadium of Rio de Janeiro.

Kuipers saw the Europa League final as a bonus. This is the extra bonus for Björn Kuipers. He was very happy with his refereeing this year, he said earlier this year on Uefa.com. “I always say it is not all about me. I am the referee and the end responsibility is mine, but I never act alone. I need my team, I need everyone around me. I am very happy with my team – we have performed very well over the past year.

Stats by KNVB (Dutch FA) about the match officials: 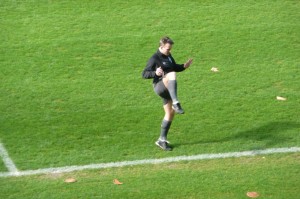