Another headline that triggered me in a negative way: 12 players sent off in Argentinian 3rd league match. That’s not how football should be.

Deportivo Roca’s played Cipolletti and a player was fouled. The referee gave a yellow card for the offence, but the ‘victim’ got mad and got sent off. The offender kept protesting and receives his second yellow. Okay, two reds let’s continue now, you might think. Then problems started when the one red-carded player tries to chase the other before he went to the dressing room. A big brawl involving players, substitutes and riot police started. According to Argentine media, referee Facundo Espinosa told them that he had sent off 10 further players in the chaos and they would be named in his official report. 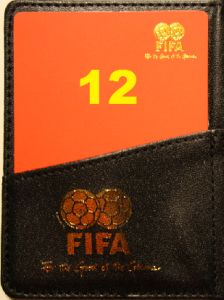 12 players sent off, that would be a negative record for me. Players luckily never got that mad when I was refereeing. The maximum number of cards for me in one match is now 2 straight reds and 1 red after two yellow cards. What is your highest number of cards?