Check out the new Adidas Champions League referee kits 2013-2014. Do you like them?

refereeworld.com says this: “This exclusive shirt is only manufactured in a very small quantity.”

The material is 100% polyester. The Adidas Champions League referee kits 2013-2014 are only available with short sleeves. 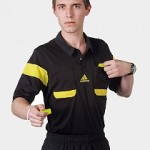 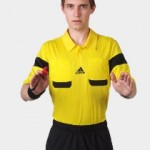 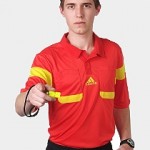 The new referee shirts for the 2012/2013 Champions League season have been released.

I’d prefer previous editions. What do you think of them? 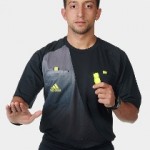 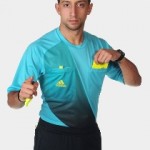 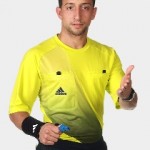 Remarkable situation in last week’s Champions League qualifiers: Itay Schechter, striker of Israelian team Hapoel Tel Aviv, got a yellow card after he put a kippah on his head and started praying.

Watch the goal and the celebration first:

This is what the Fifa Laws Of The Game 2010/2011 mention about religious signs: “Players must not reveal undergarments showing slogans or advertising. The basic compulsory equipment must not have any political, religious or personal statements.”

Uefa added this: “The referee’s decision is certainly based on Decision 1, page 20, of the FIFA Laws of the Game.” That’s the text I mentioned above.

Fifa has forbidden to wear headscarves. That’s the reason the Iranian girls team was banned from the Youth Olympics. Maybe that’s why a kippah is not allowed too.

But what about making a cross sign with your hand, I wondered. These days many players do it, even referee Massimo Busacca does. So what are players (not) allowed to do? Uefa reacted: “The referee has interpreted the goal celebration of the player as an unsporting behaviour, which might well not be linked to any religious sign or action.” Does this mean they withdraw their first message?

What would you’ve done? How do you interpret that particular rule in the LATG?