Michelangelo Minervini is a referee in the Venuzuelan capital Caracas, with a few million inhabitants and surrounded by poor neighbourhoods. “But violence against referees is very rare in Caracas.”

An interview from the Dutch Referee Blog with an ambitious 19-year-old referee from Venezuela. 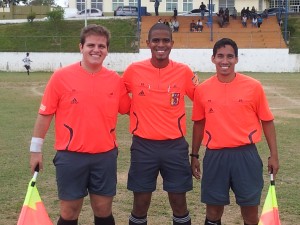 Michelangelo Minivervini (left) in the past as assistant referee.

Why did you become a referee?

“Well, I became a referee because it is like a passion for me. Since I was a kid (maybe 12 years old) I have loved to be a referee. In fact, my dad bought me my first whistle and cards when I was 12 and I loved to be the referee when my friends played soccer in the neighborghood! And I’m still loving to be a referee. I always remember Pierluigi Colina and the way he was a great referee. He speaks 5 languages! And I think that learning several languages is very important for being a terrific referee.”

“When I saw soccer with my dad in my house, I allways saw the referees, the kits, the accesories, the way they run, all the things the referees do are my motivation. But I admit that being referee is not easy at all.”

“I want to be an International FIFA Referee! I want to represent Venezuela in a soccer World Cup. I know is not easy but nothing is impossible!” He also got thinner – the picture is an old one. “Getting thinner was a goal for being an elite referee – or trying to be – and having a better health.”

How is it to officiate in Venezuela?

“It’s difficult because the grass is not on condition. In Caracas there are so many stadiums without grass, just earth, the lines on the field are not visible sometimes, the public is always screaming things against the referee, sometimes the coaches don’t respect the game.”

Do you experience a lot of violence in the big city Caracas?

“As Referee sometimes we experience violence, but is very rare.”

Who do you think will be the South-American refereeing candidates for the World Cup in 2014?

“There are many prospects! For example my friend Juan Soto. He was a referee at the Olympic Games and he is growing up. I mean: every match is different, each match brings new experiences, new skills, you learn a lot when you are the referee, when you are concentrated! All the referees learn more and more when we are on the field taking the right decisions.”

“I know he will be a World Cup referee in 2014. Another great referee is Wilmar Roldan from Colombia. He was the referee for the 3rd place in the Olympic Games (in London) and he wasn’t the referee of the final because Brazil played the final versus Mexico.”

“Enrique Osses from Chile, Mayker Gomez from Venezuela, Antonio Arias from Paraguay, Carlos Vera from Ecuador, Raul Orosco from Bolivia. Remember that South America has five places for Referees in the World Cup and the battle is very close.”

How do you judge South American match officials if you compare them to refs from other continents?