Kari Seitz gets an inmportant job as  senior manager in FIFA’s referees department. “One of my key goals was always to be a role model and make a real impact on behalf of women”, she says on the website of FIFA. The US referee officiated at four different World Cups  (1999, 2003, 2007 and 2011), as well as three Olympic soccer tournaments (2004, 2008, and 2012). No other referee ever achieved that. Men’s record holder is Canadian assistant referee Hector Vergara with 14 matches in three different World Cups. 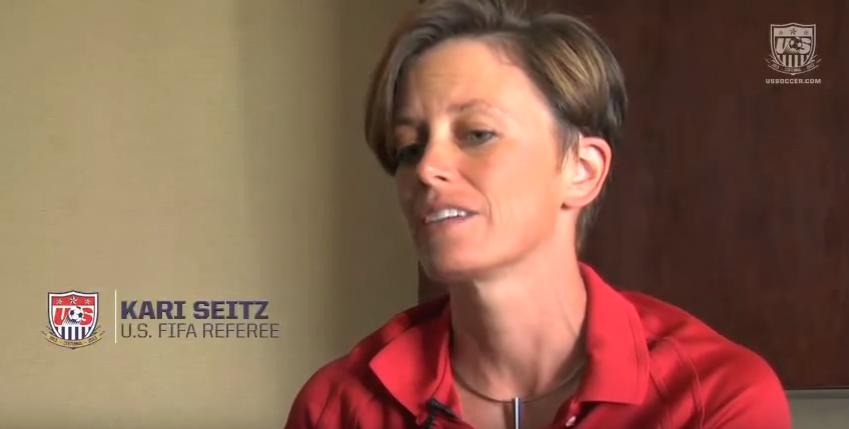 Seitz’ first task is helping with the development of the prospective list of referees for the 2019 Women’s World Cup. She got a dream job as she wants to make an impact in women’s lifes. Now she will help world’s best lead referees improve their game. “I didn’t know if [my career] would be in sport, never mind in football. I just wanted to make some kind of difference, and in refereeing I did feel that I made some progress. But this job, I feel, offers me an even bigger platform to help more women and be a positive influence and example.”

In 2013 Seitz has retired after 14 years at the highest level as active referee, while in the meantime she ran a big advertising company. At the moment of her retirement U.S. Soccer President Sunil Gulati showed the importance of role models like Seitz. “Kari has played a key role in the growth of women’s soccer in the United States over the past 15 years, and her dedication to her craft has always been admirable”.

When the US Soccer Organisation held there 100th anniversary they published an interesting interview series. One of the people that has been interviewed was Kari Seitz, right after the end of her career.

American referees at the London Olympics

After the 2012 Olympics match officials Kari Seitz, Veronica Perez and Marlene Duffy were interviewed. The refereeing trio als posted their stories during the Olympics. It’s in their Journal of the soccer referees representing the USA at the London Olympic Games 2012. For Kari Seitz it was her third consecutive appointment for an Olympic tournament.

The trio got the opening match and a quarter final, but was send home afterwards – the US team reached the final. The team was disappointed, but had many good experiences. “We’ve loved every minute of the games and we owe a large part of that to your support”, they say on their blog.

Part three of this video series with Olympic referees contains questions from the Californian referees.