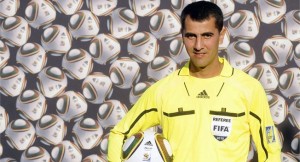 Earlier this week I posted on twitter that a referee got attacked by a swarm of bees. Today I found this vid:

Referee Carlos Eugenio Simon is preparing to hang up his whistle at the end of the season. He’s mentioned as a candidate for Minister of Sport in his counrtry Brazil and perhaps will engage in political life in the near future.

Written by Valdir Bicudo, a befriended Brazilian journalist and referee commentator at Parana Online.
Simon was the Brazilian representative in the last three World Cups. He’s, as a well-known referee, adored by many and opposed by many other fans. In an interview with Parana Online, Simon speaks about all the years in his career, the experience gained over time, analyzes the current arbitration in Brazil and abroad, and comments on the need for professionalization of refereeing and the changes that may revolutionize the role of the officials on the field and football as a whole.

Carlos Eugenio Simon graduated in journalism and wrote the book Na Diagonal do Campo (On the diagonal of the field) about the rules of the game and the routine of an referee. In addition to three World Cups, Simon also officiated four finals of the Brazilian Championship, five cup finals in Brazil and another one of the Copa Libertadores and the World Cup for Clubs, which will be held again December of this year.

You are the most important Brazilian referee these days. What is the feeling of having participated in three World Cups, a milestone in Brazilian arbitration?
Carlos Eugenio Simon: “The feeling of participating in a World Cup is wonderful – think of three. All of this is the result of much discipline, sacrifice and determination. It is worth noting the importance of family support, referees, assistants and friends.”

Why did the referees and linesmen during the recent World Cup in South Africa make mistakes to such an extent, even though the selection process was considered unprecedented by Fifa when it comes to arbitration?
“Most of the decisions were correct. There were a few mistakes, but fallibilityis part of being human. I think referees and assistants did proper training and preparation. A process which is progressing.”

Why were you and your assistants Altermir Hausmann and Roberto Braatz, although you’ve all done an excellent job, not scheduled in most games?
“We did our part, which was coming to South Africa on and work competently. We worked on two sets which had great magnitude and were praised by everyone – the committee, instructors, colleagues and the press. We are referees and are not responsible for scales.

What is the influence of the media on the work of the referee in Brazil, South America and the world?
“Some in the media world knows or has worked in the arbitration, but the majority knows very little of this activity.”

What o you think of the implementation of two more assistants behind the goal?
“From what I’ve read and heard so far, I am in favor. I think these introduction of these AR’s will help a lot, yes.”

How do see the use of technology in football?
“The chip in the ball would be one solution, for example in WC situations in games of England and Germany, where the ball crossed the goal line completely for 33 inches and cannot be seen with the naked eye by arbitration. I support a chip in the ball. What do not favor is to stop play and look at the replay. ”

What about the suffering of the referees and assistants when their performance is shown with 32 television camera’s?
“As I wrote earlier, the emotions and pressures are strong in football and we need support from psychologists, coaches, instructors, body language. All this to ease the tension.”

Isn’t the use of high technology versus a referee who has only two eyes unfair?
“It may be unfair, but we live in an age of technology. But the mathematics of arbitrage is also unfair. If you whistle ten games and make a mistake in one, is it that one they remember. The official takes on average about 150 decisions in a game and hits most, but there’s a debate that he is wrong. ”

You leave the FIFA because of the age limit of 45 years. Which Brazilian referee will succeed you?“The Brazilian Arbitration is competent and have referees who may well succeed me.”

What are your projects after you’ll stop?
“For now I do not think much about it. I want to finish my career in full physical, technical and psychological strength.”

This guest blog is translated from Portugese. Mistranslations are my bad, but you can find the original text on Bicudo’s blog. I’m very happy we could exchange copy for our blogs. If you have a good idea for a guest blog, you are more than welcome.

Read also other articles from Valdir Bicudo on the Dutch Referee Blog.

Unlike goalies and the Jabulani ball, the referees are going unnoticed at the World Cup.

Written by Valdir Bicudo, a befriended Brazilian journalist and referee commentator at Parana Online. It’s his round-up after the first round at this World Cup.

In an interview with Fifa spokesman Nicolaz Maingot last Tuesday, when he traveled between Pretoria and Johannesburg, told that the performance of referees and assistants in the early matches of World Cup in South Africa were highly impressive.

According to Maingot, Fifa, the entity that handles the football on the planet, has done efforts as never showed before to improve arbitration at the World Cup. For example the implementation of fixed arbitration trios from the same country, who are talking the same language and, thus, decreasing misconceptions within the field.

Fifa is proud because there are no problems with the performance of the officials, said the spokesman, especially because no one’s talking about the officials and everything is going smoothly.

Unlike the goalkeepers, who are failing in some games, and the Jabulani (the name of the ball in the World Cup, vb), which is said to have severe restrictions. But until the present moment the referees are accepted, despite they’ve already given four red cards, which means a average of 0.4 cards per game.

Noting the majority of matches this World Cup Soccer, I found that a several factors were essential for the optimal development of the referees. Their self-control reaches perfection and that helps a lot with making decisions on the field in the different situations during the matches.

I have noticed that both referees and assistants are keeping a grip on themselves. Not that long ago I noticed a relentless attitude when they officiated in Fifa competitions. This change is the work of Werner Helsen, a professor at the University Louvre (Belgium) who trained the referees from Fifa and Uefa.

In the case of assistants, who are delegated the very difficult task to mark the obstruction, I must say they make good calls. In addition to that, I’d like to stress that the teamwork, the positioning of the assistants and the integration among the members of the refereeing team is very good. These results are even more promising for the second stage of the world, with a marked increase in the quality of refereeing ..

What also should be noted is the magnificent work done by the Spanish professor Jose Maria Garcia Aranda, who’s responsible for technical preparation of the arbitration, and furthermore for his influence in displaying representative trio’s in a competition with the magnitude of a World Cup.

PS: Ravshan Irmatov (Fifa-Uzbekistan) and Carlos Eugenio Simon (Fifa-Brazil) showed, until the beginning of the second inning, the best performance in decision-making in the field of play. The hit rate of both exceeded 93% in the games that they worked.

This guest blog is translated from Portugese. Mistranslations are my bad, but you can find the original text on Bicudo’s blog. I’m very happy we could exchange copy for our blogs. If you have a good idea for a guest blog, you are more than welcome.