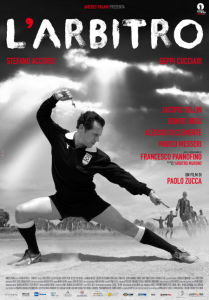 An Italian referee movie about a corrupt referee has been released during the Venice Film Festival this week. The story tells the story of the rise and fall of corrupt referee Cruciani.

The screenplay of Paolo Zucca and Barbara Alberti shows also the story of two Italian teams at the lowest football levels in Italy. “The story of the two teams alternates with that of the spectacular rise of Cruciani, an ambitious referee who shoots to the highest levels on the international scene, only to get an unpleasant surprise…”, says the film festival on their website.

Movie comanpy Le Pacte says about the movie: “An International referee, a blind trainer, an untamed shrew, a revengeful shepherd and a dubious goleador share the fate of the most disjointed football championship in the world.”

Have a look at the Italian referee movie trailer below to get in impression of the movie.