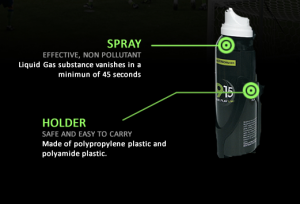 Assistants referee at the u21 Fifa World Cup are allowed to use “referee spray” to mark position of free kick and defensive walls. It’s the first time during such an international tournament.

“To have made a debut in a FIFA World Cup is undoubtedly the most important step we’ve taken together with the approval given us by IFAB (the International FA Board),” the spray’s Argentine inventor and producer Pablo Silva told Reuters.

Silva hopes this referee gadget will be used during the 2014 World Cup in Brazil. The name of the product is Aerosol 9-15, referring to the 9.15 metres distance for the defensive wall. That’s why some call it the defensive spray.

The spray is biodegradable and disappears in just 45 seconds, so there will be no permanent lines on the field. It’s easy to carry on the waist of the referees. The use of the spray is very common in South-American countries – even the big competitions of Brazil and Argentina and the Libertadores Cup.

It sometimes results in wonderful video’s, like the assistant in the game between Santos and Corinthians in Brazil. He’s going crazy with referee spray, painting circles on the ground.

German referees already announced that they are not willing to use the spray in Europe. “Soon we will be running with a backpack on and measure the distance to the wall with a spring rule”, they say on Goal.com.