The substitution procedure is new in the 2019-2020 season. The biggest change: players leave the field of play at the nearest point on the boundary line.

But what if players refuse? Or what would be a good reason to do differently? A nice case study with video examples for you. 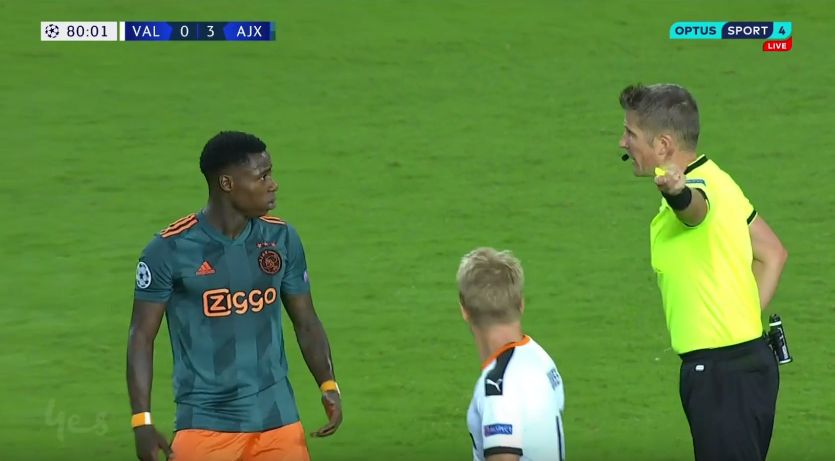 When can a player be substituted?

First of all, the normal procedure according to the 2019-2020 Laws of the Game. To replace a player with a substitute it is important that the refreee is notified, but that’s not all. A referee gives a player permission to leave the field of play and – now comes the new part – he/she “must leave by the nearest point on the boundary line”.

And that’s this case study is all about. Ajax player Promes wants to leave near the 4th official, but referee Orsato tells him to go out othe other side. It results in a discussion between them, but the referee is correct to show a yellow card. Unfortunately the video of the incident has been deleted.

Secondly, I’d like to discuss reason to handle differently. The Laws of the game also mention about leaving at the nearest point: “unless the referee indicates that the player may leave directly and immediately at the halfway line or another point”.

What are good reasons to do so?

An injury of a player for example. But also keep safety or security in mind. I saw something interesting in Belgium and their football association has also shared it on Twitter to eduacate the fans. Good job for that!

They wrote: “Our referee Lawrence Visser noticed that Steven Defour’s safety wasn’t guaranteed during Anderlecht vs Antwerp. That’s why he decided to let him go off the pitch at the middle line.

The reasoning behind this: Defour is a former Anderlecht player, now at Antwerp and when substituted on the touchline, he had to run past all the Anderlecht fans. Smart move.

Our referee Lawrence Visser noticed that @StevenDefour‘s safety wasn’t guaranteed during #ANDANT. That’s why he decided to let him go off the pitch at the middle line pic.twitter.com/9fH3P97MNw

What if players go off on the boundary line?

Players must go immediately to the technical area or dressing room and takes no further part in the match, except where return substitutions are permitted.

And when a player refuses to leave?

If a player who is to be substituted refuses to leave, play continues.

Do you think this doesn’t happen? Check out the case study with Chelsea goalkeeper Kepa and how Jon Moss handled it.

Some other rules about the substitution procedure

The substitute only enters:

All substituted players and substitutes are subject to the referee’s authority whether they play or not.

2 thoughts on “Substitution procedure: leaving at the nearest point”