An interview with Stephanie Forde. Actually, I got the text in Dutch ready before the summer, but I failed with the translation. It took me ages. Procrastination. Many apologies to Stephanie for publishing it so late.

Luckily Ben van Maaren from Refereeing Books told me he wants to translate some interviews sometimes and he helped me out. Thanks so much. And I have to tell you the interview is really interesting and worth reading. Forde became a Fifa referee, but faced a very difficult time. “I kept fighting and training until my body stepped in and said STOP loudly.” More about this below in the interview. 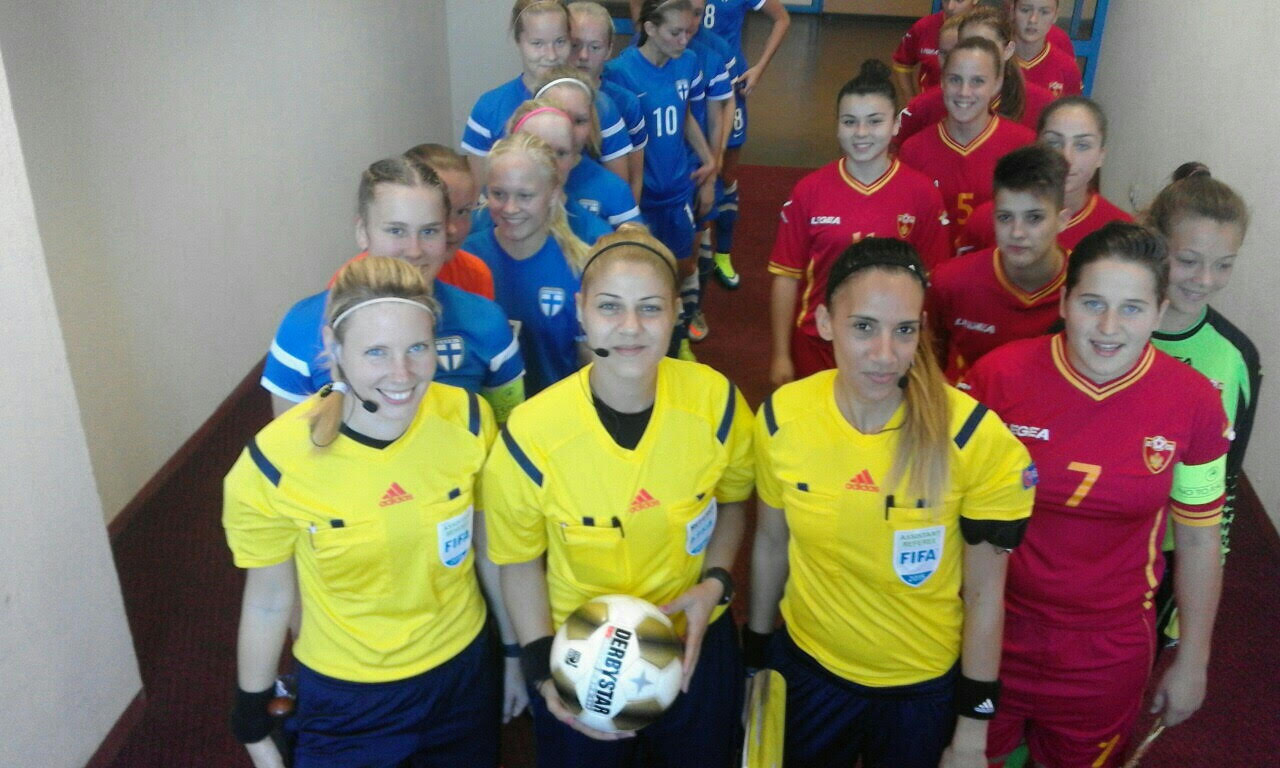 When and why did you become a referee?
Stephanie Forde: “When I was six years old, I started playing football for VK White-Boys, the local club my brother had joined earlier. Unfortunately, I had to stop when I turned 12 because the club didn’t have an all-girls team. At the time girls weren’t allowed to play in boys’ teams after their 12th birthday. In those days women’s football was not played at the level it is now, so I decided not to join an all-girls team. In fact, I stopped playing football altogether.

But within a year I was missing the game so much that I started looking for an alternative way of staying involved in football. I went to my old club for advice, where they suggested that I take up the whistle and ref their U6 to U12 teams in the weekends. I did that for two years until I turned 15. Then I was old enough to follow a referees course at the KBVB [the Belgian football association].

What do you like so much about refereeing?
Stephanie Forde: The great thing about reffing is that no two matches, no two weeks are the same. You get to know new people, you travel to lots of different places. As referee you experience new things each and every time. Refereeing even causes your personality to change. It boosts your self-confidence, enhances your problem-solving skills and encourages you on your way to independence.

Experiences at u19 tournament

Last year you officiated at an U19 tournament in Israel. Let me quote your words from an article on the UEFA website: “There’s competition as we all want a place in the final, but it’s healthy and positive.”(uefa.com) Can you tell a bit more about the spirit among the officials at a tournament? How do you go about improving one another?
Stephanie Forde: Frankly, this was the most special tournament I’ve ever been at. As it is UEFA which selects the officials, you are your country’s only representative there. As I had been around for some years already, I had gotten to know quite a few of the other girls.

At first, everyone’s rather nervous, for the first one or two days there you have to go through some physical tests. If you don’t pass those, you go home. Those tests are quite hard in their own right and then there’s the climate in Israel, which nobody had time to prepare for.

Once the tests are done, everyone loosens up and after the first match is over, there’s like this big release. I think it’s more or less normal that you spend more time with the team that you officiated the first match with. Well, that’s what happened to me, anyway. I knew the ref from other tournaments and one assistant ref as well. If you know some people already, you tend to hook up with them more easily during training sessions, over dinner, after matches, etc.

After the matches, a few of us would get together and review our performance. We discuss what went well, what could be better, what really needed improvement. Each of us would have their say but also share tips for future use. It was up to you what to do with those tips. But I found them most helpful, I learned a lot from them.
We would also get feedback from the professionals at these tournaments. They analysed each and every match, discussing them with those involved. They also held sessions on technique, which proved very useful.

After three matches they decide on your fate for the rest of the tournament: semi-final – or not. At 11 pm you get told whether to go or to stay. There were a number of girls who, if told to leave, had to be at the airport less than five hours later. Anyway, what it boils down to is that at that moment half the group is going home. The announcement does cause quite a few emotions to run free.
If you’re allowed to say, you feel a little off kilter that first day. There was this big group, suddenly it’s halved and everything has changed. One of my friends there also had to leave. One good thing, though: you can stay in touch. The matches are broadcasted on Eurosport and you get a lot of support from the girls who are now watching from home. That was incredible.

In a mail you wrote that you are no longer a FIFA referee. What happened? What do you feel when you don’t pass the physical test just at a time when you have this great – or better put: even greater – career ahead of you?
Stephanie Forde: After Israel I was at the peak of my physical condition. Unfortunately, a week later I fell ill. A simple bout of laryngitis started it all. A week after this infection I had to leave for another tournament, in Northern Ireland – not aware that my laryngitis had not quite cleared up yet. I just switched on the automatic pilot, fought the fatigue, resisted being ill… I kept fighting and training until my body stepped in and said STOP loudly.

Now I realise all too well that after weeks of intense activity, both abroad and at home, you really need a bit of R&R.

Goals for the future

I was glad to read that you are working hard on a comeback. At what level do you expect to be active early next season?
Stephanie Forde: Well, as a matter of fact, I will resign as a referee in the Belgian professional ranks and return to the amateur leagues. So I will first see how I will perform in the physical tests for the Belgian 3rd division – they’re not as demanding, so I stand a better chance of passing.

How did you get back on track?
Stephanie Forde: I have used a Personal Coach before, so I will simply follow the training schedule I used back then, but I’ll be looking for a bit more balance. Earlier I could do an afternoon training session and then spend two hours in the gym at night. Now I’ll just stick to five training sessions a week. Possibly one more or one less, I’ll see, depending on my roster of matches. My goals are simple: pass all tests and return to my old fitness level as soon as possible. My many bouts of illness and an operation this year has thrown me back to square one every time, but I’m positive and full of confidence. These are realistic and definitely achievable goals, as past experience has shown.

What plans do you have for your career?
Stephanie Forde: I want to be able to give 100% each and every match while still having fun working on this great hobby.

You have also started working as a Referee Development Officer (RDO) for the KBVB. What does that entail? And what makes it so much fun?
Stephanie Forde: My work for the KBVB has always been many-faceted. It ranges from producing video clips for grassroots training purposes to compiling tables and statistics for the Jupiler Pro League (the highest Belgian football league). After every matchday I make the clips for these statistics to review them with my superior. It is hugely fascinating work, because it has enabled me to take big strides forward in my career as an assistant referee, in addition to allowing me to keep learning new stuff every day.

What three tips do you pass on to “your” referees in your role as RDO?