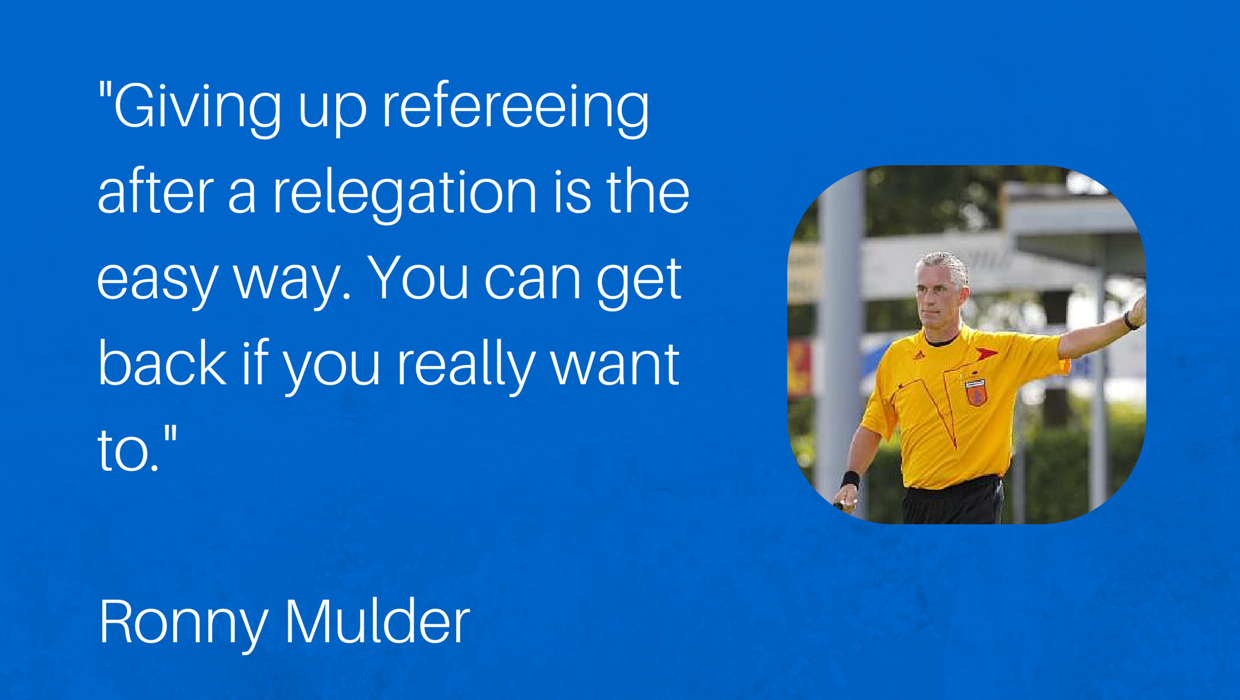 All promoted referees posted happy things on Facebook after the end of the season. There was one positive message from a referee that has been relegated. His motto: don’t quit, but work even harder to get back on a higher level. “Giving up is the easy way”, says the relegated referee. “You can get back if you really want to.”

It wasn’t the first time Ronny Mulder got the news that he was relegated as a referee. He refereed in the Topklasse, the highest amateur level, when it was introduced in 2010-2011. But he was already relegated twice before and worked his way up again. “I know how it feels to relegate. I am 56 now and it’s my 28th year as referee. You should always have a goal as referee – no matter how old you are. I was already 50 when I reached the national amateur level.”

His most important message for referees: don’t quit if you have a setback. “Giving up is the easiest way. That is not an option for me.”

We don’t learn to lose

“As a referee on the higher amateur levels we know that 3 or 4 out of 12 will relegate”, Mulder says. “It can happen and you should take it into account. But the problem is: we don’t learn to lose.”

Mulder is also a coach for young talented referees. “What would those refs think if I would quit?” When his pupils get a bad mark he learns them not to complain about he assessors. “I ask them how they will try to improve on that aspect of the game. They need to make reflective reports about their performance. Everybody wants the pat on the shoulder, but somotimes you need a kick in the butt as well”

The road to the top is long for referees. Mulder has much respect the referees in the lowest groups. “Only 3 or 4 out of 75 will make the step up. Then you need persistance, because the chance you won’t earn a promotion is so high”

Have you ever been relegated? How did you find the power to go for it another season and did it pay off?
For our Dutch colleagues. Ronny Mulder was referee in the game which tv host Hans Kraaij jr. threw away his jacket.

2 thoughts on ““Stay positive when you’re a relegated referee””