In 1980 Sander van Roekel was a promising striker in the u8 team of SKV, but he got into refereeing very early in his career. When he entered professional football as referee, a member of Van Roekel’s football club wrote on the club’s website: “If Sander Van Roekel will reach the top of professional football, and if people maybe even will be talking about him in Europe, remains to be seen.” 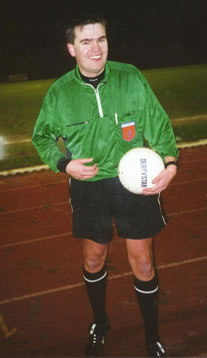 Sander van Roekel when he was a young referee. Photo courtesy SKV.

Sander van Roekel was also with Björn Kuipers, Bas Nijhuis and Pol van Boekel on the C-list of Dutch referees, talented refs who just joined professional football. “But I soon realised they were better”, Van Roekel told newspaper De Gelderlander. “Then I switched to a role as assistant referee.” Van Roekel became an international referee in 2007 and teams up with Kuipers almost immediately; both will be joined by Erwin Zeinstra in 2011. “The referee makes the choice who he wants in his refereeing team.”

Van Roekel trains three times a week at Veenendaal Atletiek Vereniging, a sports club for runners. He also works three days a week as teacher in economy at a secondary school. “I’ve made good arrangements with my colleagues”, the assistant ref says. “Because if the KNVB (Dutch FA) calls me, I need to be there.” And his students, what do they think of his other job? “They know I’m an assistant referee and address me about the Champions League and the World Cup”, he told Helden Online, “but I’m not really in the spotlight. And that’s what I like.”

In the shadows of Björn Kuipers

Van Roekel accepts his role in the shadows of Björn Kuipers. Although the Dutch FA talks about “team Kuipers”, it’s Kuipers who does the media talks and the assistants are more at the background. “Well, as assistant referee you need to know your place”, he told Spits. “If Björn goes to the theatre everybody whispers his name and they wonder if it’s him or not. When I go to the theater, no one recognizes me.”

The Dutch assistant referee told that he can easily walk in Amsterdam the day after the Ajax – PSV clash in the Dutch league. “Nobody knows who I am, not even when I had to make a questionable decision on the field.”

The author on the website of Van Roekel’s football club was not completely right about the future of his career. Yes, he’s active on Europe and world’s highest level, but we don’t hear a lot about him. He’s a quiet man in the shadows of Björn Kuipers – and is happy with that.

Read the profile of Björn Kuipers.

3 thoughts on “Sander van Roekel happy in shadow of Kuipers”