Refereeing is fun, but also hard work. “Like any other sport you have competition, I like to think it keeps you on your toes knowing that people are working for the same thing as you”, says Ryan Hedges, a level 5 referee.

I got the luck he has written down some answers about refereing for a local paper and gave me permission to use it. It’s quite an interesting story, well worth a read. 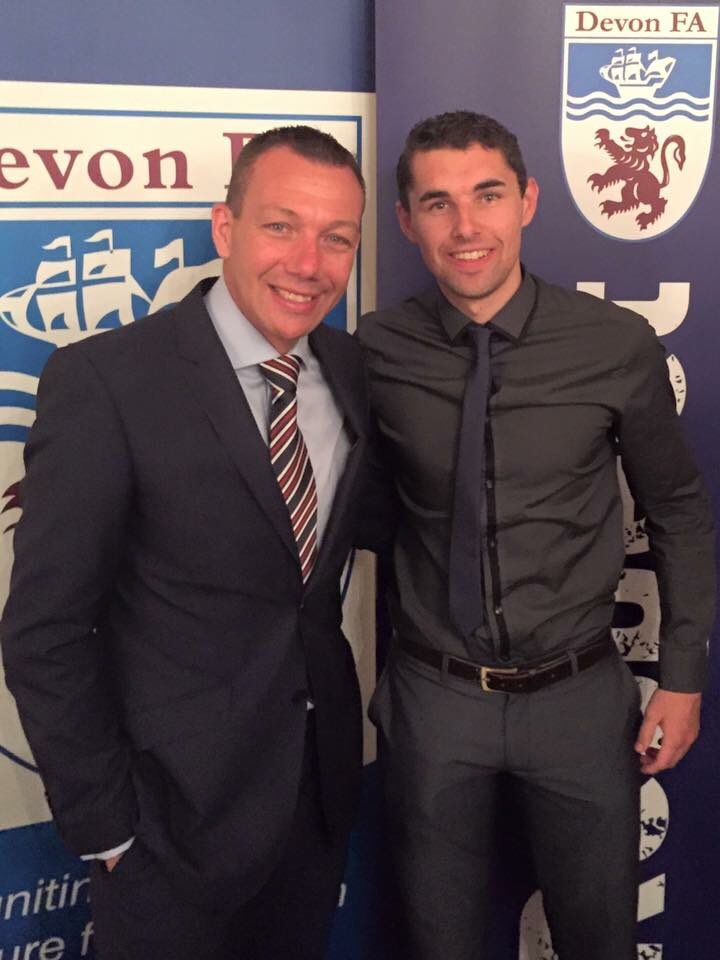 Young referee of the week. This blog wants more stories from young ambitious referees. Are you one or do you know one, please get in touch with me via the comments below, an e-mail to dutchreferee@gmail.com or message on Twitter or Facebook.

How old are you and how did you get into refereeing?

I am currently 23 and got into refereeing when I was 14. The Chief Executive of Devon FA Paul Morrison was my Manager when I was playing for Buckland and Milber U15’s. I knew his son well and along with one other friend, we we’re persuaded to take the referee exam.  If I’m honest I didn’t only do it just because I was a failed footballer, the pocket money you earn at 14; compared with a paper round for example, appealed to us!

I did stay playing football for a few more years but decided that my career was more likely to progress officiating than playing, this is why I am attempting to work my way up to as high as I can personally be.

What levels are you officiating at?

I have great pride in the fact that I am working my way up through the levels, for people who are not familiar, there are 11 levels. They vary from a newly trained referee right up to the top of the game- FIFA. I am currently a Senior County Referee at Level 5. I cover the South Devon League and the South West Peninsula East/West Divisions. I also Officiate as an Assistant Referee on the South West Premier Division. I am working towards level 4 this season.

I like to think that anyone involved in sport is ambitious, wanting to get to the top of their game and I’m no different. Like any other sport you have competition, I like to think it keeps you on your toes knowing that people are working for the same thing as you. You also have things that get in the way sometimes but it’s how you react which will make you stronger the fight always goes on.

How much support do you get from Devon FA?

In my eight years as a Qualified Referee, Devon FA have gone from strength to strength within their capacity of nurturing young referees, I think their hardest job is to keep us in the game. I certainly think they push you to your potential, I am not sure if I’d be writing this as a level 5 referee today if it wasn’t for the coaching I received from the Devon Referee’s Academy. That’s right, before you read this you probably thought only footballers have an Academy but I was on the Devon one for around five years. It opened up opportunities to Referee all three of the Professional Football Club Academies in Devon and even their full reserve sides. I’d like to thank Jason Haywood; Devon FA’s Referee Development Officer, for his support.

What is the most memorable match you have officiated in?

It’s safe to say that I’ve had a few! A highlight was being called by the FA to do an FA Vase Game 1st Round Proper when I was a level 6. If I remember rightly the game required two level 4’s to act as an assistant but as there were none, (nor any 5’s available) I was asked. You could see the step up in play and if anything made me motivated to perhaps one day make that level on a regular basis.

Is it part of the referee’s job to accept criticism or would you prefer manager’s to keep their mouths shut?

Of course you should accept criticism, no one is perfect. You go into the game expecting it but I always believe if a Manager treats you with respect and lets you explain your decision then I welcome their opinion. I’d admit after a game if I made the incorrect decision. I personally do not see a reason to argue with them during the game as whatever my decision is, I wouldn’t change it once it’s made. This is something I can’t understand even in the Premier League, do they really think the Referee will change his/her mind once they are sure?

I know it is mostly frustration that brings a player or manager to argue a decision but I always mention in my pre match with the captains that it is how you talk to me. Overall, dissent is still too much of a bigger problem in football and I can see understand why referee’s are quitting.  You only need to look at the comparison to rugby to understand.

How difficult is it being a referee?

At times extremely! If things aren’t going right then it’s important to analyse after what has gone wrong and admit your mistakes. There is a fine line for players having the referee’s respect where he/she is happy to talk about a decision and losing it gaining a caution for dissent.

On the other hand, you may have heard of the ‘Referee bug’, it’s that feeling you get when you start officiating  you just keep coming back it’s hard to explain but my fellow colleagues know the feeling!

What are the best things about being a referee?

For me it has to be the fact that I have already surpassed the level of football officiating than I would have done  playing. To be on the same field as some past current and ex professional players is something I am very proud of. Being able to keep up with them; as they pass the ball 60 yards, is up there too!

People use the term power when refereeing but that is a dangerous word to use. Yes you are ‘in charge’ of a football match no matter what level but with power brings expectation. I think if you always try your best at any level and every match you can’t ask yourself of any more. Referee assessors will take care of the rest knowing   your potential and how far you can go.

Do you play the game at all?

The simple answer would be no but I do take part in a 5-a-side league in Plymouth for my employers Ashfords LLP. We have a friendly league running on a Monday night and always welcome companies to join us. Feel free to find me on twitter: @refrhedges if you’d like to join. I have always thought that I’d like to get back into playing 11 a side one day that’s if any manager could trust me in defence!

What would be your dream game to referee?

Simply, the biggest game in World Football – the World Cup Final. That’s any referee’s dream. My idol has always been Mike Mallarkey and having met him on a few occasions, I’d like to replicate what he did and be an Assistant Referee. At Level 5, technically you could say I’m half way there but let’s take it one game at a time!

Young referee of the week

This blog wants more stories from young ambitious referees. Are you one or do you know one, please get in touch with me via the comments below, an e-mail to dutchreferee@gmail.com or message on Twitter or Facebook.