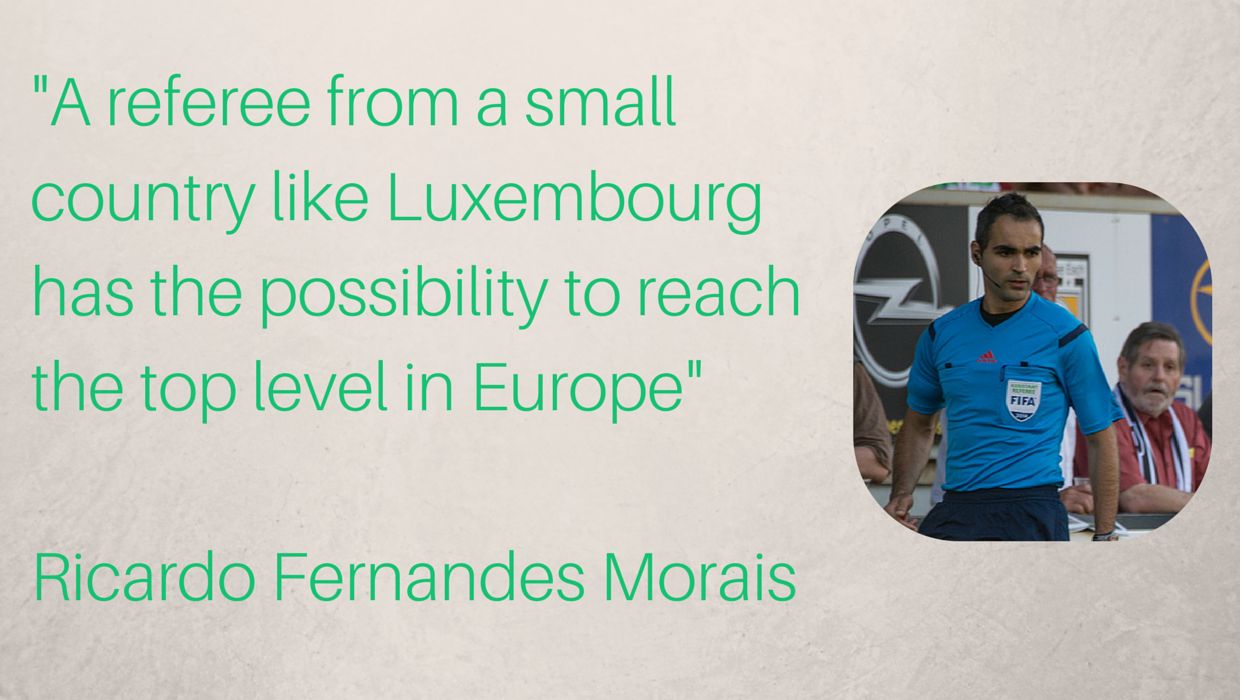 Ricardo Fernandes Morais is a young assistant referee from Luxembourg and he is selected for the u19 European Championships in Greece. He has dreams of a bright future despite coming from a small country. “Considering the Luxemburg football is amateur (neither pro nor semi-pro) it is unfortunately difficult to improve as a referee. But mainly the career of Mr. Hamer proofs us that also a referee from a small country like Luxembourg has the possibility to reach the top level in Europe. This is really encouraging.”

An interview with Ricardo Fernandes Morais on Dutch Referee Blog.

I was quite surprised when the Luxembourg FA called me to inform me on my appointment but proud at the same time. It is a real pleasure to take part in this U19 Final tournament. I’m sure that I will have a great time in Greece.

When do you leave to Greece and what will you do in preparation before the tournament?

I have to be in Greece on the 2nd of July. Considering we did pass the fitness check in Luxembourg recently I’m still in the rhythm of the intense training. But as fitness alone is not sufficient I’m also analysing the clips available on the UEFA.com site and well as my past reports.

It will be my second tournament as such considering I was already last year in Belfast (Northern-Ireland) for an U19 qualification round. However my first within the final round and for sure a rewarding experience. It is always a pleasure to meet new referees from UEFA’s top divisions and I will try to take the most use and benefit out of it.

I started within the world of football as a player but initiated quite soon the referee’s career when I was 16 years old. I will for sure never forget my first game. I was very nervous as any young referee may be, but really enjoyed it. The further games I did the more I like to be on a field, whether in the middle as main referee or on the line as assistant.

How would you describe yourself as referee?

I take my games really serious and always try to as much neutral as possible. I must say that I’m quite difficult to get influenced by players, officials and other participants and I’m some sometimes even quite strict. Concentration and good physical condition are one of my key points. I hate it when both teams don’t try to play football.

Fifa.com says you became an international referee in 2000. Is that a typo or were you really 17 when you made your debut for example assisting Alain Hamer when his usual AR’s were injured?

I started my international career in 2014, so I’m currently in my second year as FIFA assistant referee. Therefore it can just be a mistake on the FIFA.com website. Unfortunately, I didn’t have the chance to assist Mr. Hamer on his international appointments as he and his assistants Holtgen and Mangen stopped their international careers before I got my FIFA promotion. Nevertheless, each of them gave me useful advises which will for sure be of an important help for my future as international.

What does it take for you to be an international referee?

We do have one obligatory training and between 1 and 2 games a week. I also do some training on my own, mainly jogging but this remains marginal. Must say that I’m quite lucky to have such a good physical condition that I’m not required to exercise on a daily basis.

As my counterparts may acknowledge, being a referee requires us to sacrifice a lot of time of our private life. Every weekend it’s all about football. Also considering the international appointments during the week it is difficult to have some free time for ourselves. As I’m quite young and without any engagements there is no huge problem to manage this. Nevertheless, I will have to see in some further time how to best balance between family and refereeing.

How is it to referee in a small country like Luxembourg?

Considering the Luxemburg football is amateur (neither professional nor semi-professional), it is unfortunately difficult to improve as a referee, mainly for the international level. Also being in such a small country leads us to meet all the time the same players or teams. Luckily, due to the agreements between our FA and the neighbour FAs (France, Belgium and Germany) as well as with Malta, we do have the chance in Luxembourg to perform exchanges between referees. This has helped me a lot to acquire some experience from other leagues and develop myself with advises given by the foreign instructors. Comparing with other countries, this is a quite unique opportunity which Luxembourg offers. However, the main part of my experience I do gain from my appointments on UEFA games. 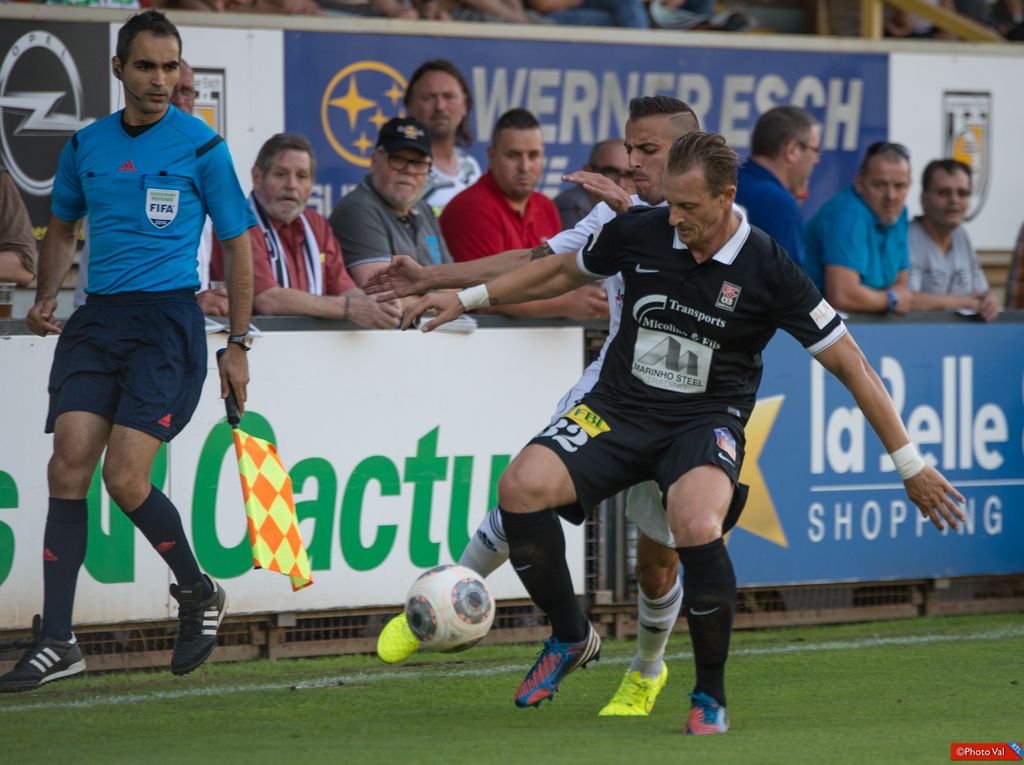 Alain Hamer and his assistants mr. Holtgen and Mangen officiated many games in Belgium and France as well as many international games. How do they help you and other young referees? And how important is it that you know it’s possible for an assistant referee from a small country to reach the Champions League level? What are your goals?

Both of them are closely following my performance as well as the performance of my FIFA counterparts in Luxembourg. They regularly provide us with helpful guidelines and advise. They also frequently give courses locally. But the most useful is that they share quite a lot of their experience from their past international career, which is a real chance for referees from such a small country.

Mainly the career of Mr. Hamer proofs us that also a referee from a small country like Luxembourg has the possibility to reach the top level in Europe. This is really encouraging. As for my personal objectives, I would like to be part of a referee’s team in important international games at Champions League or UEFA Cup level as well as important qualification games for national teams.

I’m now for 15 years a referee and I for sure learned a lot from it, whether on a personal or sportive level. It has been a major factor for my personal development and for sure helped me to become the individual I am today. It also gave me the opportunity so far to visit other countries, see other cultures and meet really interesting people. I currently don’t think about for how long I will be doing this. But around 2 years ago I was questioning myself whether I should not quit. Disappointment of the opportunities I got and seeing me blocked at a certain level of the referee’s career did bring me to question myself whether all of this was really worth it. Currently I just want to enjoy the opportunities I get and will see what the future brings.

My hardest challenge so far was to prove to my FA, mainly to the referees’ committee that they could rely on in me and my abilities. Today I think I did achieve this. The most important was to challenge myself and learn from my mistakes. Being patient and whatever circumstances were given to always look forward and believe in myself did make the difference.

And one odd question. What is your relation with Tania Fernandes Morais, the female referee from Luxembourg? How do you help each other as referees to become better?

Tania Fernandes Morais is my sister and for the 4th year FIFA referee and top league referee in Luxembourg. We quite often discuss about our local and international games. We also do jointly video analysis to give to each other our opinion on specific situations, tips and share our experience. We do not always share the same opinion, but quite often come to a constructive conclusion. Considering we face the same problems in our referee’s life it is very helpful, we also motivate each other.

One of the tips of Ricardo is: believe that you can do it. What are your goals? And can you reach them?