A Dutch interviewer in newspaper ‘de Volkskrant’ about big football tournaments: “That’s where the Ronaldo’s of this world are.” 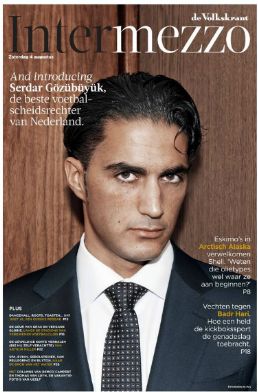 “That means nothing to me. Come on, if they go to the bathroom, they stink too.”

The reply of Serdar Gözübüyük, a very talented Dutch referee, who stresses that a certain status doesn’t change the person. He emphasises that even if you become more popular, also as a referee, you need to be yourself. You can the the full interview (in Dutch) in last weekend’s Volkskrant.

“There is a greater appeal to your sense of empathy. One minute you make a lace set, the next whistle you for a serious offense.”

Barry Huizinga is going to whistle at the Olympic football tournament and talks about the difference with regular football.

“It’s safe to say my preparations for this season have been far better than last year given I spent twelve weeks hopping around like long John Silver after ankle ligament reconstruction.”

Bobby Madden from Scotland blogs about his preparations for next season. Worth reading and he’ll publish more parts of his journey towards season start. (That’s what the words ‘part 1’ suggest.)

A referee “must be prepared to accept that he may occasionally punish a player when no simulation has occurred because such decisions are difficult to make.”

From a statement by the Professional Game Match Officials (UK). These guidelines must reduce the number of cheating incidents.