Two weeks ago I enjoyed a wonderful holiday and I even got the chance of refereeing in Scotland. The semi-final of the Brambles Cup on Islay was my international debut. A great experience!

Only one week before the holiday I tweeted that I was going to Scotland and that fast-forwarded everything toward my first match abroad. The same evening I posted the tweet I got in touch with a Scottish referee, a blogger from island of Islay and finally with Kilchoman Football Club who told me they were happy to have me as their referee.

Only 1 tournament as referee during the Easter Weekend before I @VisitScotland. Looking forward to the holiday. Do you have a game soon?

When I got on the ferry to Islay I got a message that the game was postponed, but I was also welcome to referee the other semi-final between Bowmore and the Islay Wanderers. If that was fine as well? Ofcourse it was. Before I left The Netherlands I packed my suitcase with two referee outfits, a whistle, cards, pencils, a score card and football boots. I was ready for it!

On the matchday my wife and I arrived in the morning in Bowmore. We planned a walk around the village in the morning/early afternoon, that was fine before the game which started at 6.30 pm. But first thing we did in Bowmore was checking the pitches. I must say I was a little shocked when I saw a gravel pitch – never expected that (check it in background of pic below). I also brought my running shoes, but was happy there was a grass pitch as well. 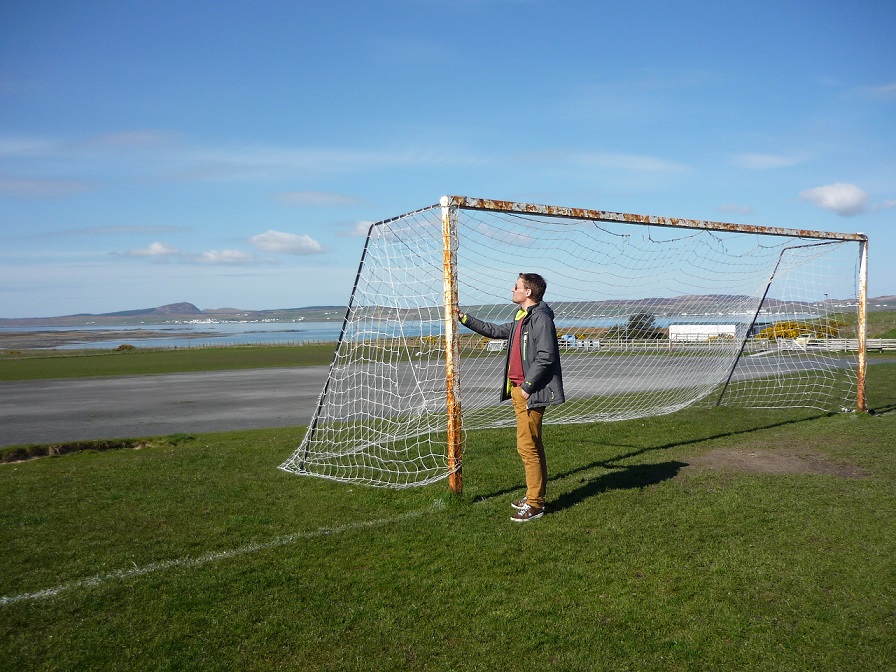 Every soccer pitch has some basic requirements, but you won’t hear me complain as a guest for this game. The sea and wind made the bars of the goal rusty and there was only one corner flag. The pitch was the smallest I’ve ever seen with only about 3 metres from the edge of the penalty area to the corner flag. That is fine with the Laws of the Game by the way, did you know that? Minimum width is 45 metres and this pitch was over 46 (2x 16,5 metres for penalty area, 7,32 metre for the goal, plus 2x 3 metres to corner flag). 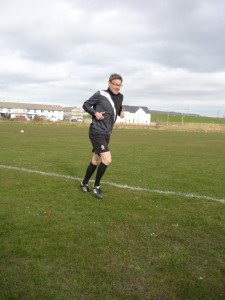 I always arrive at least an hour early before my games. I did not know how this would be for the games on Islay. I was the first person at the parking lot next to the pitch. After a couple of minutes an older man arrived who opened the dressing room. We talked about the upcoming game and he warned me that I should not expect top class football. “They are amateurs”, he says. “It’s even quite difficult on this island to get enough players.” The first players arrived in their work vans, using putty knives to get the dirt of their football boots. I was the first dressed up for the game and was one of the few that did a proper warming-up.

Talking to the older man was quite a good way of getting an idea what to expect during the game. It’s quite difficult when you want to prepare for games and you can’t find anything about the teams online. The only source I had was the Facebook page of Kilchoman FC who played against both teams earlier this year.

The words of the older man about getting enough players were quite spot on. The 11th team member arrived 1 minute before the kick-off. It meant that there was no 12th person available to be an assistant referee – that was up to me then. That’s quite difficult by the way, but did not get many complaints. 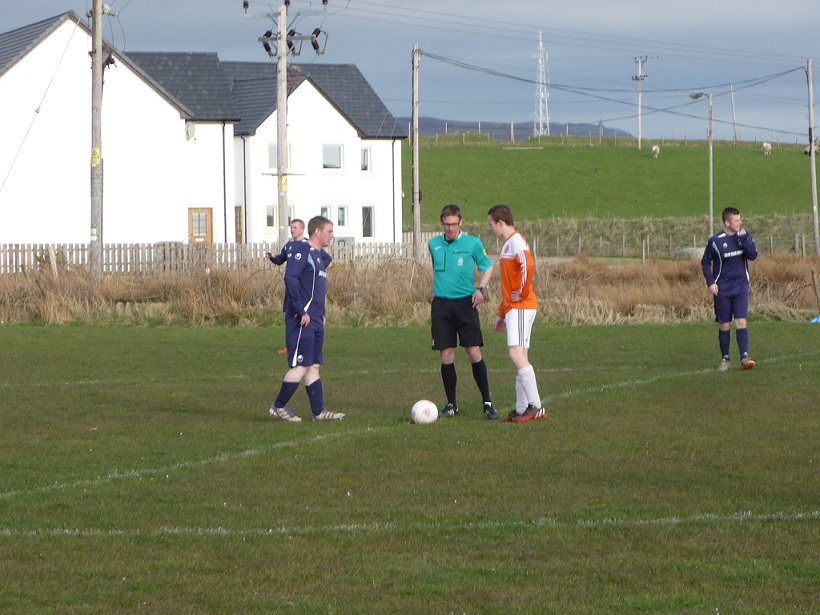 The Bowmore player were on average way older than the youngsters from the Islay Wanderers. Both teams wanted to win, but the young players had a better start. It did not result in a lead, and Bowmore scored after a deflection right before half-time. The Wanders scored twice shortly after the break – the 1-2 was a stunning free kick. But Bowmore did not give up and fought back with two goals in the last 10 minutes of the game. Then the Islay Wanderers coach said something that quite surprised me. “No respect, wee men”. I realised he meant that the young players should not look up to the older players and should not be afraid to challenge them – in a fair way – and give everything they had. But with every football association having a respect campaign, it sounded a little odd to me.

Lessons of this foreign game?

Players were maybe a little surprised a guy from The Netherlands took charge of their game. They wondered why someone has chosen to take some time during his holiday to ref them. A fan that came a little late asked with a Scottish accent: “Who’s the ref? He looks professional”. That felt good. I think it’s a good lesson for every referee that no matter what level you officiate your appearance should be good.

And even though the basic requirements of the pitch were not 100%, this game showed me how much people love to play football and that they like that there is a referee who wants to officiate the game. It’s about working hard to win, but give eachother and the referee a handshake afterwards. I must admit I really enjoyed it.

If you can officiate a game when you’re abroad for a holiday or maybe at a tournament, take that chance. You will learn from it!

After the game both coaches walked up to me and told me it was common both would give me 10 pounds as match fee. If that was okay? I would have done it for free, but the Scotch with a cheese board in the hotel bar was a good finish of a wonderful experience.

The day after the game my wife and I walked into the Bruichladdich distillery for a tasting (it was awesome and tasteful!). “How are you doing, ref”, said the guy who scored the winning goal. He worked at the distillery. “You handled the game well. It must be different to ref a bunch of hooligans.” 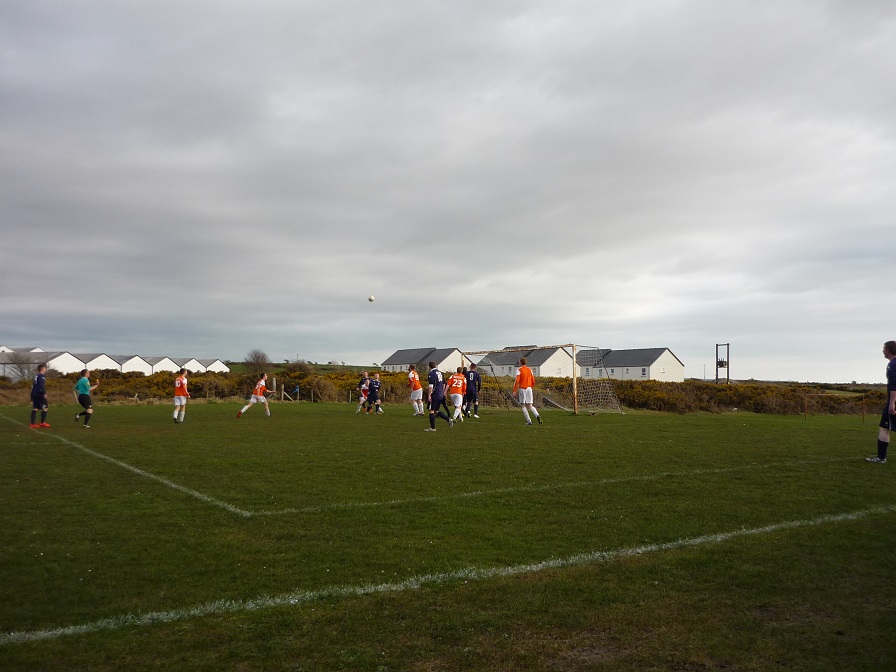 2 thoughts on “Refereeing in Scotland: my international debut”